The November 26 episode of Bigg Boss 14 begins Abhinav Shukla allowing Nikki Tamboli to sleep inside the bedroom area as she is unwell. But Nikki uses the opportunity to steal makeup brushes as she does not have access to her personal items present inside the room. Eijaz Khan, Rubina Dilaik and Abhinav ask her to leave the sleeping zone after she gets caught but Nikki remains unfazed and refuses to move.

Things quickly get out of hand with Abhinav being blamed for the Nikki debacle. This also leads to Abhinav, Aly Goni and Jasmin Bhasin entering into a heated midnight battle. An angry Abhinav decides to become a human shield the next day by placing himself firmly against the door so that Nikki cannot enter the house again. Nikki tries to push the door but to no avail.

An irked Rubina lashes out at Jasmin and Aly for attacking Abhinav the previous night. She accuses Jasmin of talking behind her back and being fake towards her. Jasmin retaliates by announcing that their friendship is over. As they continue to argue over the matter, captain Kavita Kaushik decides to not intervene in the matter but says that she can't help Nikki since she can't stand with the wrong. This is followed by Rubina and Abhinav getting into an ugly argument. Rubina accuses her husband of always listening to others instead of trusting her decisions.

In the meantime, Aly gives an idea to Nikki to ask Rubina's team to give them her belongings or else she will destroy their belongings present in the bathroom area. As a result, Rubina and Jasmin once again argue over Nikki damaging their personal belongings. Kavita yells at Nikki for kicking the property but she doesn't listen.

Later, Jasmin comes and asks Rubina's team for breakfast and everyone except Rubina refuse to eat. Abhinav loses his cool at Rubina for not being a team player.

They continue to argue as Rubina points out that Abhinav always shows his faith in Jasmin. She then tries to make him understand that Jasmin is playing her game. As Rubina decides to stick to her decision of not eating, her entire team is seen criticising Jasmin's behaviour. Soon Pavitra Punia joins Rubina as they go on a bhook hartal to protest against Jasmin's team for not giving enough food to satiate their hunger. 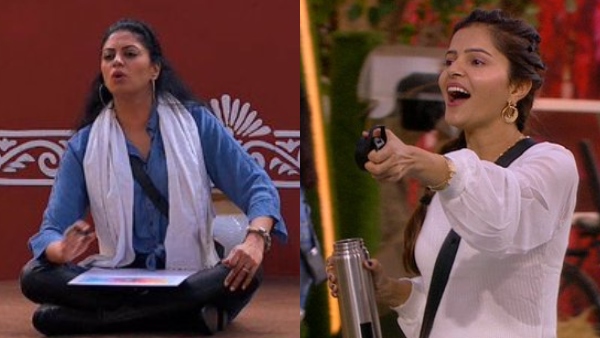