The excitement and euphoria around Bigg Boss 14 has been increasing among the fans and the audience with each passing day. The 14th edition of the controversial show is scheduled to air its grand premiere on October 3. In the meantime, the makers are leaving no stone unturned in making sure on their promise of delivering a truly entertaining new season.

And now, after host Salman Khan, the three new promos of Bigg Boss 14 feature season 13 and season 7 winners Sidharth Shukla and Gauahar Khan and Season 11 runner-up Hina Khan. Sid is seen decked in all-black formal attire, looking handsome as always. He is seen sharing how he went about to win the house and asked if there is anyone out there who has it in them to give him a tough fight (takkar).

In another promo, Gauahar is seen dressed in a beautiful gown whilst sitting on a throne amid chess players. The Bigg Boss veteran then went ahead and challenged the players for an equally scintillating season.

Hina too speaks about winning the audience's heart and how Bigg Boss will soon be subject the new inmates to the #AbScenePaltega! challenge.

Well, with all these surprises and curiosity, the showrunners have definitely managed in piquing the audiences’ interest. Bigg Boss 14 hosted by Salman Khan show will see a host of different personalities being locked up in the infamous glasshouse very soon.

However, this year, due to the ongoing COVID-19 crisis, the contestants have been quarantined as precautionary measures and will enter the house only after undergoing and passing the COVID 19 test. Bigg Boss 14 will air at 10:30 pm during weekdays and 9 pm during weekends on Colors TV. 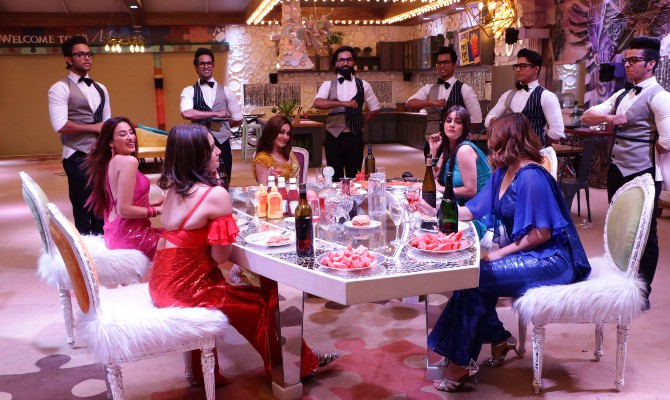