Salman Khan welcomes the audience for Bigg Boss 14 Weekend Ka Vaar and begins the show with an entertainment segment. Housemates don their popular TV avatars with Jasmin Bhasin dancing as Nayanthara from Naagin 3. Kavita Kaushik is seen as a cop and Rubina Dilaik is as Saumya from Shakti.

Host Salman then welcomes a special panel consisting of Kamya Panjabi, Devoleena Bhattacharjee, Sandiip Sikcand and Ronnit Biswas on stage. Kavita cries on seeing her husband Ronnit on the podium. He and Kamya tell her to calm down. Kamya then appreciates Kavita for being a solo player but Sandiip says that he has not heard Kavita say something good about anyone.

This is followed by the panel coming to Jasmin. Kamya asks her what is her real personality. Is it the one they witnessed before Aly Goni’s entry or the one she shows now? Jasmin says she is a slow starter and needs time to know people and hence Aly’s entry gave her confidence and that she is happy the way she is coming across. Devoleena gives Jasmin a reality check and reveals that she is looking arrogant and overconfident followed by Kamya adding that she is looking negative.

Sandiip also tells Aly and Jasmin to be supportive and not be each other’s crutches. Devo then says Aly has ruined Jasmin's game. She reminds the duo that Bigg Boss is an individual show so people need to play accordingly. Kamya tells Aly to let Jasmin fight her own battles.

This is followed by Jasmin and Rubina being given a task similar to the 'Paap Ki Potli’ one. Eijaz Khan says Jasmin has more hatred than Rubina while Rahul Vaidya believes that Rubina thinks very highly about herself. This is followed by Kavita saying Rubina has a bad opinion about people and Nikki Tamboli adding that Rubina is jealous.

Later, in an interesting turn of events, Bigg Boss himself announces the evicted contestant’s name instead of Salman Khan. BB states that Pavitra Punia is being evicted from the house as she received the least number of votes from the audience. Pavitra gives a long hug to Eijaz while Eijaz gives her a kiss. She bids adieu to everyone and exits the house. 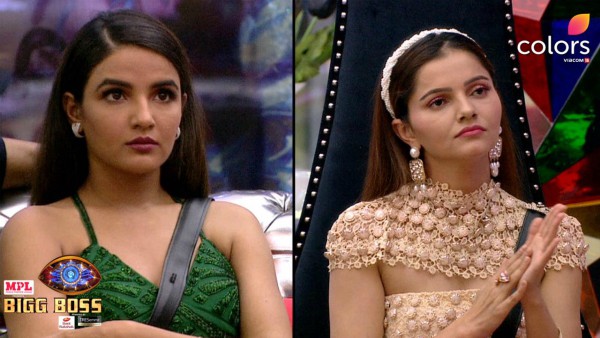