Divyanka Tripathi, who became popular with her shows Banoo Main Teri Dulhann and Yeh Hai Mohabbatein, was a part of the mythological show Ramayan: Sabke Jeevan Ka Aadhar, which was aired on Zee TV in 2012. The show was produced by Sagar Arts.

In 2012's Ramayan, Divyanka was seen as Chandra Dev disguised as Devi Apsara, who was sent by the Gods to distract people at the wedding of Lord Rama and Sita. She made a special dance appearance in the mythological show. About her look, Divyanka had then said that she was given an Amrapali styling with a stunning beautiful white costume.

About her performance, Divyanka had told Tellychakkar, "It was great fun to do a classical dance as the dance form has its own charm."

The actress had also praised the production house, she had said, "These guys are masters in depicting Ramayan on the small screen (third time). Having had their entire logistics and creative aspects ready, shooting was pretty breezy."

In the 2012's show, Gagan Malik and Neha Sargam played the roles of Rama and Sita. While Malhar Pandya played Hanuman, Sachin Tyagi was seen as Ravana and Neil Bhatt portrayed the role of Laxman.

Ramanand Sagar directed Ramayan, which was aired during 1987 on DD National, is being re-run on Doordarshan. Arun Govil (Ram), Deepika Chikhalia (Sita), Sunil Lahri (Laxman) and Arvind Trivedi (Raavan) played the lead roles in the show. 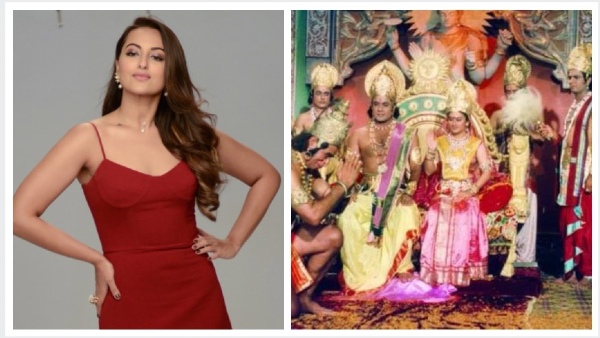 Also Read: Did Doordarshan Troll Sonakshi Sinha With A Poll On Ramayan?