The controversial queen Rakhi Sawant's old picture hugging Pakistani flag has gone viral yet again! The actress has shared this picture on May 8, 2019 and was trolled for draping Pakistani flag. She had then clarified that although she loves India, since she was playing the character of a Pakistani dancer in a film named Muddha 370, she had to pose with the flag.

Coming back to why the pictures have gone viral now, apparently, this post appeared on Facebook and was shared across multiple private and closed groups on the social media platform. The caption read as, "Yeh hai #Rakhi Sawant ki sacchai kudh ko Hindustani hone ki bakwaas karti rehti hai (This is the reality of Rakhi Sawant, who speaks nonsense about her being a proud Indian)." She began trending on social media after netizens shared the exact same pictures and caption to attack the actor. Take a look at a few posts!

A Dwivedi: Either Rakhi Sawant wants to Pamper Khan gang or may Settle in Pakistan at the earliest?☺️😀😍😎🤣🤣🤣🤣.

Rakhi Clarifies About The Picture

A few hours ago, she posted a video clarifying about the picture. She called an actor (we assume it to be Kangana Ranaut) as ‘totli and tucchi' and her supporters as ‘tucchi', who have been making her pictures viral. She called Bollywood's big actors as ‘Sher'. She even asked netizens to continue sharing her pictures as it is giving her publicity.

Recently, Rakhi was in the news for posting a video about Kangana Ranaut. She had said that Kangana Ranaut has no 'aukaad' to talk against Mumbai or Shiv Sena. She warned that shooting in Mumbai for her will become difficult if she speaks against the city. She also asked the Queen actress to talk about nepotism and justice for Sushant Sing Rajput. 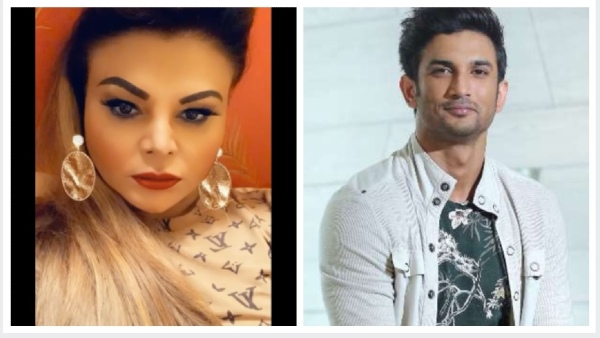 Rakhi Sawant Brutally Trolled For Claiming Sushant Singh Rajput Will Be Reborn As Her Son!