On popular demand, Doordarshan re-aired iconic shows, especially the mythological shows - Ramayan and Mahabharat. As the viewers are aware, Ramayan's re-run was on a record-breaking spree. Ramayan had also garnered record-breaking TRPs and topped the TRP chart. The actors of Ramayan are quite active on social media, especially after its re-run. Recently, Sunil Lahri, who played the role of Laxman in Ramayan, took to his Instagram account, to narrate a few funny incidents.

The first incident that he narrated was about Guru Vasishth asharm. He revaled that they teased Guru Vasishth (played by Sudhir Dalvi) by making funny faces from behind the camera, which made him laugh. This made the director, Ramanand Sagar angry as they had to take re-shots. When Ramanand Sagar asked Sudhir what made him laugh, instead of naming the real culprits, Sudhir told the director, "I am getting a tickling feeling under my beard and wig," which saved them from getting scolded.

Sunil also narrated another incident that delayed the shoot. He revealed that during the shooting of a scene under a tree, a bird pooped on an artist, who had to clean himself and change the costume. This delayed their shooting.

Before signing off, the actor promised fans that he will be narrating a few more behind-the-scene stories, especially a story behind his dhoti and bathing sequence in his next episode (video) on Instagram.

Behind the screen what happened while shooting second episode of Ramayan

Currently, on Doordarshan, after Ramayan and Uttar Ramayan's end, Shri Krishna is being aired. On the other hand, Ramayan is currently being aired on Star Plus at 7.30 pm while Mahabharat is aired on Colors TV at 7 pm. 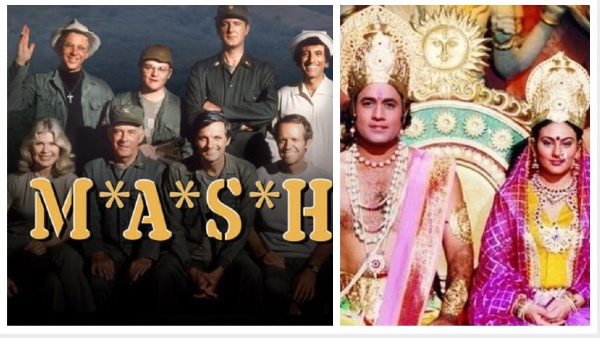 Also Read: Ramayan Might Have Beaten Game Of Thrones But It Did NOT Set A World Record!