Adhvik Mahajan and Rashami Desai's short film titled Tamas, dropped on the internet on Tuesday, 7th July, 2020. Tamas has been shot during the lockdown, using an iPhone, and therefore the lead actors in the film have not shot it together. The film features the lockdown period as the backdrop for the story.

The film starts off with Adhvik's character Rishi, watching the news as Prime Minister Modi announces the lockdown. Later, a conversation with his parents, who are going to meet a suitor for him, causes much distress to him as he is already engaged to his girlfriend without his parents knowing. This news causes him and his girlfriend to breakup and drives Rishi off the edge as he decides to end his life.

At that point, Rashami's character Saina, who is his neighbour, seeks his help as she is all alone in her house with her baby. The story that unfolds is that of a beautiful relationship developing between the two, with social commentary on issues such as Islamophobia.

The makers described the film as, "During these testing times we have faced isolation, loneliness and even desperation. But life always finds a way. Relationships can develop in the unlikeliest of places. This is a story of one such relationship."

Talking about the movie, Rashami had told IANS, "I'm really excited for Tamas. It is my first short film. I had shot during the lockdown when we were facing such a difficult time. I never thought that Adhvik would be able to create something like this and I'll get an opportunity to work with him." 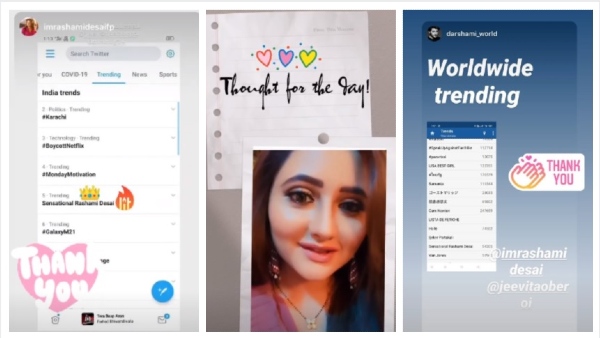