Sapna Choudhary, who is known as 'Anarkali of Haryana', has been hitting the headlines ever since her Bigg Boss stint. Post the show, she also underwent a major makeover and has been extremely busy attending various events. She also appeared in a television show Laado-Veerpur Ki Mardani, and films- Dosti Ke Side Effects and Veere Di Wedding. She has been active on social media and keeping her fans updated with latest posts. According to reports, the ex-Bigg Boss contestant is blessed with a baby boy.

It has to be recalled that earlier this year, there were rumours that Sapna got engaged to her long-time boyfriend Veer Sahu, who is also a Haryanvi singer and has appeared in many Haryanvi and Punjabi songs. According to a Dainik Jagran report, Sapna and Veer secretly tied the knot in January 2020, after being together for several years.

According to HT report, Veer confirmed the news of his secret marriage during a Facebook live session. He also addressed the fans' complaints about their decision to keep their wedding a secret. He started the live session by saying, "To all my brothers, young and old, there's good news. I have become a father." He added, "Humne apni marzi se shadi kari hai, aiso logo ko kyu aitraaz hai? (We married because it was our decision, why are people upset?)

Veer also added in the live session that he and Sapna got married on New Year's eve under circumstances where his uncle was on his death bed due to cancer.

‘I Don’t Have To Provide Proof’

Well, let's see what Sapna has to say about the same! 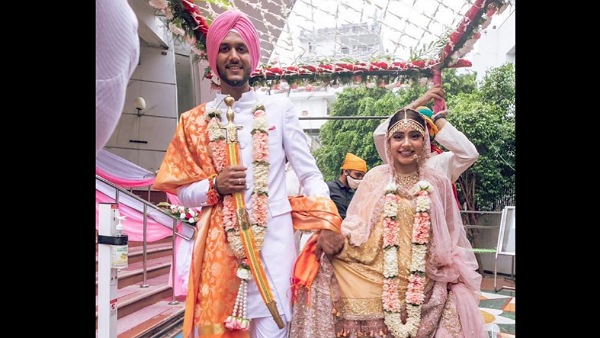