Recently, Ajay Devgn and Kajol graced Sony TV's popular show, The Kapil Sharma Show to promote their film, Tanhaji: The Unsung Warrior. The Bollywood actors were seen sharing stories from their personal and professional lives. The couple was also seen pulling each other's leg. The episode was filled with laughter. Recently, Kapil shared an uncensored video from the episode in which Ajay was seen telling Kapil that his daughter will beat him up after watching the episode. Read on to know what made the Bollywood actor say it!

In the uncensored footage from TKSS' Tanhaji - The Unsung Warrior special episode, Kajol and Ajay were seen talking about money with Kapil, who kept saying that he needs more money now as he has a daughter. For the uninitiated, that Kapil and his wife Ginni Chatrath recently welcomed baby girl Anayra.

In the video, Kapil asked Kajol to give Ajay points to which Ajay questioned why him? To which Kapil said that he has to do something in the episode as they (makers) will ask him as to what he did in the episode. He then went on to say, "Ghar bi chalana hai sir, ek bacchi ka baap hun." It is then Ajay stopped him and said, "Bacchi badi hogayi aur eh saab episode dekhegi na, bahot maarege badi hoke. Bolegi,'Mere paida hote hai mere naam se bheek maangne lag gaye' (when his daughter grows up and watches this episode, she is going to beat him up)."

Ajay's statement left everyone in splits and Kapil further said, "Yeh sab karke aapne mujhe pala hai."
Archana Puran Singh then interfered and said that Kapil takes so much money that everyone else gets less money. To this Kapil said, "Ajao loot lo." 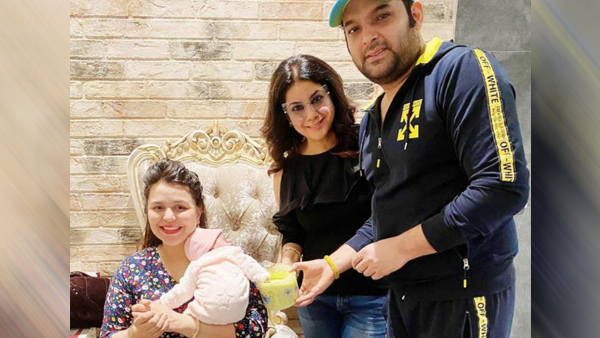