Indian Idol 12 finale is nearing and the contestants are gearing up for both semi-finale and finale episodes. Recently, the makers of the show released a video in which they revealed that the semi-finale will be Karan Johar special episode. Now, the makers have released yet another promo in which the contestants visit Manish Malhotra's store to get dressed for Karan Johar special episode.


Manish then says, "I love them (contestants) so much and I love the show so much that I agreed to dress them up for the show."

The contestants are then seen trying up Manish's designer clothes. Sayli says, "It's my dream to wear Manish's clothes on my wedding. But then I was wondering if it is possible." The scene then shifts to Manish, who says, "It looks like it is your engagement. Your parents will be happy." When Sayli says that she wants to get married, Manish interferes and tells, "Abhi career pehle...singing na? (laughs)" 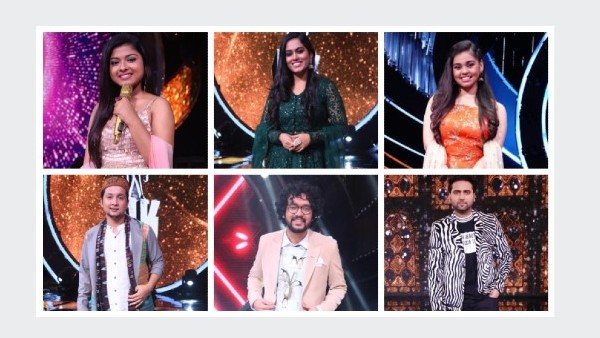 In the promo, Manish is seen telling, "It was so much fun. I have never done this before. I don't think that I dressed up any contestants for reality show."

Then the scene shifts to Nihal, who said that it was like a dream come true to meet sir (Manish) and he is very happy and excited that he will be wearing his outfits in next episode. Danish, who was also excited, said that he has seen many celebrities wearing Manish Malhotra's dresses, but now they are wearing it and it is big thing. He also thanked Indian Idol for the same.

At the end of the video, Manish takes selfie with the top six contestants, and said that all contestants are winners as each one of them are fantastic. He said that it will be very difficult time for judges to decide the winner. He added that if he was to decide, he would have made six parts of the trophy and given it to each contestant.

Indian Idol 12's Director Neeraj Sharma On Having A 12-Hour Finale: We Wanted To Do Something Really Special

In the semi-finale, one contestant will be eliminated. So at the finale top 5 contestants will be fighting for the trophy. As per the promo, there will be more than 3 acts on the show that will be aired for 12 hours!