Prince Narula and Yuvika Chaudhary are inevitably one of the cutest couples on the TV fraternity. While the couple never fails to paint the town red with their love, their social media PDA is often unmissable. Recently Prince took to his Instagram handle to share some lovely pictures with his wife and also had a beautiful message for her.

Talking about the pictures, it shows Yuvika Chaudhary and Prince Narula presumably on the sets of their upcoming music video. Yuvika can be sitting on a chair while Prince leans on her head lovingly. The Om Shanti Om actress looks ethereal in a bridal avatar. She has opted for a peach coloured lehenga. She has further paired up the look with a huge nose ring, Maangtika and gorgeous jewellery with her hair tied to a neat bun. 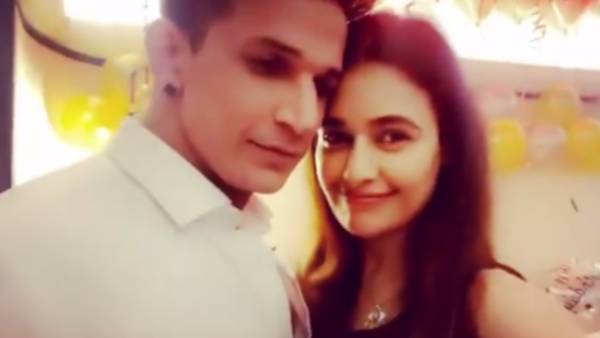 Prince Narula on the other hand looks dapper in a black kurta. Sharing the pictures, the Bigg Boss 9 winner stated in Hindi in the caption that he does not know which pictures are the best out of these but for him, all of them are the best as he can see Yuvika working and be with her during this process. He further goes on to call his wife a 'Stargirl.' The Roadies X2 panellist concludes the post by stating that he wishes that the song comes out soon and that the fans give their reactions and shower more love to his wife. Take a look at his post.

Earlier on August 2, Yuvika Chaudhary rung in her birthday with Prince Narula and also shared a glimpse of the same on her social media handle. The Naughty At 40 actress shared a post wherein she could be seen planting a kiss in her husband Prince Narula's cheeks. The actress also could be seen posing amidst the delightful decoration at her place. One could see red balloons and streamers flood the entire room. Yuvika had captioned it using a red heart and a blue Nazar emoji. Take a look at the post.

On the work front, the couple has been appearing in many music videos together. They will be soon seen in the song 'Thodda Pyaar'. Apart from this, they have also appeared in music videos like 'Do Tin Suit', 'Pyaar Hoya' and 'Jhuti Soh' together.