The Kapil Sharma Show's Sugandha Mishra has tied the knot with boyfriend Dr Sanket Bhosale in Jalandhar on Monday, April 26, 2021. The wedding was an intimate affair with very few people in attendance, who apparently got their Rapid Antigen Test done before entering the venue, due to the ongoing pandemic.

Producer Preeti Simoes and her sister Neeti Simoes attended the comedienne's wedding festivities and had shared pictures on her social media account. Preeti shared a picture of the newly-wed couple and captioned it as 'Just Married'.


While Sugandha looks radiant in a yellow off shoulder blouse paired with a sequinned pink lehenga, Sanket looks dapper in a white and yellow outfit, coordinating with his ladylove. The couple was all smiles as they posed for the camera. They indeed look adorable together.
Preeti and Neeti had shared Sugandha's mehendi ceremony pictures too. The comedienne-singer looked beautiful in a green-golden lehenga. 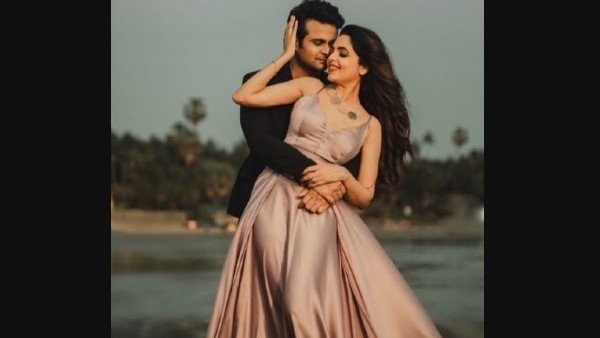 Regarding her preparation for wedding, Sugandha had revealed to a leading daily that she has done most of her wedding shopping online and had started the preparation from December for her wedding attire. She had also said that it doesn't matter if the marriage is happening in the presence of just 20 people, but she wanted to wear a 10 kg lehenga.

Also Read: Sugandha Mishra On Her Wedding: I Can Marry Online Also But I Have To Wear A 10 Kg Lehenga

Also, Sanket had told an entertainment portal that being a doctor himself, he has taken all precautions and had said that RT-PCR test will be done before going to the airport and at the venue too there will be an antigen test done. He had also revealed that they had planned to get married last year, but due to COVID-19 they delayed their plans. Although this is second wave, he said that they couldn't delay much and have followed all the norms set by the government.