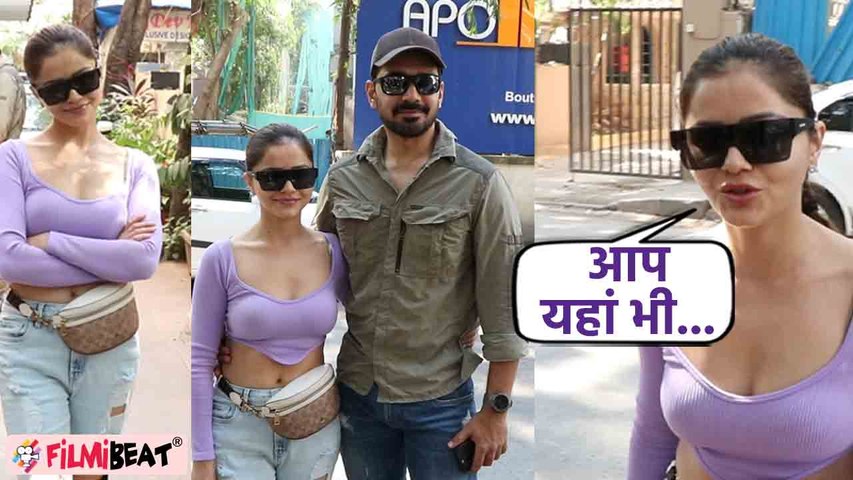 Rubina Dilaik created a massive buzz in the town when she participated in Jhalak Dikhhla Jaa 10. The Bigg Boss 14 winner went on to make heads turn with the spectacular performances on the show and as among the most popular contestants on the dance based reality show. In fact, Rubina managed to be among the top 3 contestants of Jhalak Dikhhla Jaa 10 along with Faisal Shaikh and Gunjan Sinha. As Gunjan won the dance reality show, Faisal and Rubina were announced as the first and second runner ups respectively.

As the show came to an end this weekend, Rubina is once again making the headlines today as she was spotted outside a maternity clinic with husband Abhinav Shukla. In the pics, Rubina was seen dressed in a stylish mauve coloured full sleeves crop top which she had paired with an icy blue ripped denims. She completed the look with a high plait. On the other hand, Abhinav looked dapper in an olive green shirt with ripped jeans. As the power couple was clicked outside the maternity clinic, there are reports that Rubina and Abhinav are planning to have a baby soon.

Take a look at Rubina Dilaik and Abhinav Shukla's pics:

To note, it's been a while since there are reports about Rubina and Abhinav planning to have a baby. However, when the actress was recently quizzed about it, she stated, "Would that be possible with the pace I have been running to studios and rehearsing for dance shows non-stop for Jhalak? It has been extremely hectic for the past few months, so there is no time to think of a baby right now. And we are not planning to start a family in the near future. As of now, I am only focussing on good work". We wonder if Rubina and Abhinav have changed their plan now and are now looking forward to having a child soon.

For the uninitiated, Rubina and Abhinav had met each other during Ganpati celebrations at a friend's place and tied the knot in June 2018 after dating each other for a while. The couple had even participated in Bigg Boss 14 together and dished out major marriage goals.