The grand finale of Khatron Ke Khiladi 12 commenced with Rohit Shetty introducing the top five finalists Rubina, Mohit, Tushar, Faisu and Jannat. This was accompanied by Ranveer Singh, Jacqueline Fernandez and Pooja Hegde’s dance performance. It must be noted that the entire cast of Rohit’s film Cirkus graced the grand finale episode. 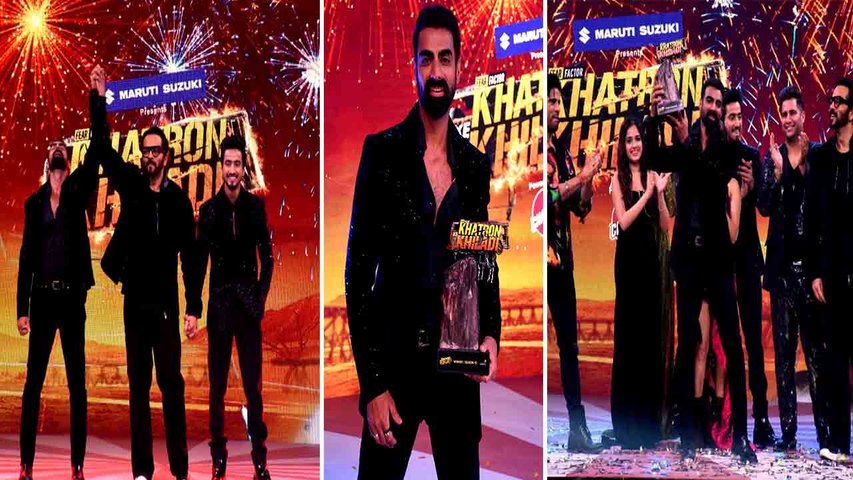 The first stunt took place between Rubina and Mohit where they both had to drive a car and hit the other cars that came on their way. There were a total of FOUR cars on the track and Mohit managed to hit all four cars. However, since Rubina only hit three cars, she got eliminated from the show.

The second stunt was performed by Jannat, Faisu and Tushar. The top 2 will join Mohit while the loser will get eliminated. The contestants had to cut open three containers with a hammer and extinguish the fire. All three finalists performed well but Jannat ended up taking the most amount of time to complete the challenge. As a result, Tushar and Faisu joined Mohit while Jannat got eliminated from the show.

The finale stunt took place between the three finalists Mohit, Tushar and Faisu. In this stunt, the finalists had to get into a container truck and cut open the boxes. They then had to climb onto a chopper (helicopter) with 2 boxes of explosives and push the button to put those boxes in the water. Mohit, Faisu and Tushar performed very well. But, Mohit took the most amount of time and hence was named the third runner of the show.

Faisu and Tushar became the top two finalists and then, Rohit Shetty announced that Tushar Kalia had won Khatron Ke Khiladi 12. Faisu Sheikh, on the other hand, became the 1st runner-up of this season. Tushar took home the trophy and a cash prize of Rs. 20 lakhs. He also received a Maruti Suzuki Swift car.