On March 23, superstar Rajinikanth finally made his television debut with Discovery Channel's much-loved show, Into The Wild with Bear Grylls. The Darbar actor shot for the show in January this year, in the Bandipur National Park. Since then, fans across the globe were eagerly waiting for his episode to air. So did Rajinikanth live-up to all the hype and expectations? Read on to know the details!

Bear Grylls, who is a renowned survival instructor and also the host of the show Into The Wild, opens the episode by introducing Rajinikanth as the true superstar of India. The two gentlemen then embark on an adventurous journey through the Bandipur National Park, and talk about some important issues like water conservation and wildlife conservation.

But the episode highlights much more than just that. The megastar reveals a lot about his personal life which is quite interesting. He tells Bear Grylls about him working as a bus conductor at the age of 18 and then finally deciding to enter the world of acting by the age of 22. Rajinikanth also reveals that his real name is Shivaji Rao Gaekwad and how he was discovered by K Balachander, post which his life changed completely.

Talking about water conversation, Rajinikanth points out that whoever manages to save water, will rule the world. Hence, water conservation is the need of the hour in India. Bear Grylls agrees with him and says the water conservation problem is not just prevalent in India but across the world. In between all the serious discussions, Rajinikanth and Grylls also indulge in some friendly banter and that's fun to witness. The latter even says that the former has a good sense of humour.

Since the show is about adventure and surviving, of course, the two men get into action. First, they cross a dangerous bridge quite easily and then they get down and dirty while crossing a muddy riverine. While Bear tries to scare the superstar a few times, Rajinikanth doesn't budge and continues with the adventures. Throughout the journey, Rajinikanth gets several messages from his colleagues including Kamal Haasan and Akshay Kumar which is heartening to see.

Yes, we would have loved to see these two men do more adventurous stuff on the show. But then again, as Bear said in the episode that if anything would have happened to Rajinikanth, he would have become the most infamous person in India. And that's something nobody wants, right?

Overall, Rajinikanth's much-awaited TV debut was not just grand and adventurous, but also entertaining as the actor got emotional while talking about his initial days. He even showcased his fun side while chatting with Bear Grylls. His humility, his passion for his work and his conviction about water conservation came across quite effortlessly and that was the best part about Thalaiva's television debut. 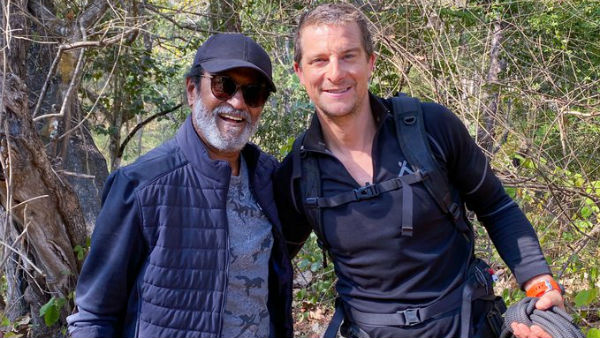 Man Vs Wild: Rajinikanth Not Injured While Shooting For The Show With Bear Grylls