Asha Negi and Sharman Joshi's most-awaited web series, Baarish Season 2 will be released tomorrow (May 6). The Season 2 revolves around the couple, rediscovering their bond and finding love through every challenge that life throws at them, as they dream of a future together as a family. But destiny had planned something else for them. Yeh Hai Mohabbatein actor, Abhishek Verma, and veteran actor Jeetendra Kapoor will be making their digital debut with the show. While Abhishek will play a pivotal role, Jeetendra will be seen in a special cameo.

Abhishek will be seen playing the role of Rohit, who is very discerning for his age, having learned from his past mistakes and experiences. He will be seen opposite Sheetal Tiwari, who plays Asha Negi's sister, Asmi.

Abhishek On His Digital Debut

Speaking about his digital debut, Abhishek Verma quipped, "This is going to be my debut in the digital space and I am very excited about it. I learned a lot while working with director Nandita Mehra and amazing actors like Sharman Joshi and Asha Negi. My character, Rohit is a good-looking Punjabi boy who believes in true love and has learned from his mistakes made in a past relationship. I thoroughly enjoyed playing this role and I couldn't have thought of a better platform for my digital debut."

Jeetendra To Play A Veteran In The Diamond Business

Apparently, Jeetendra will be doing a special cameo in the show. He will be seen playing the role of Jeetuji Gandhi, a veteran in the diamond business who has an eye for not just recognizing diamonds but also people. His character portrays selfless personality who is always in a positive frame of mind and always wants the best for himself and others.

Apparently, Anuj (played by Sharman) will be suffering a huge loss in his business. Despite this, Jeetuji sees a true potential hidden inside and partners with him. He will also be seen playing cupid between Anuj and Gauravi (played by Asha Negi). Apparently, he tries various ways to help them solve their misunderstandings, so much so that he takes the help of his daughter to hatch a plan to reunite the couple.

Excited about his role, Jeetendra Kapoor said, "It's great to be back on screen and making my digital debut with ALTBalaji feels like I'm home. The cast and crew have been extremely warm on set and it's lovely to see their affection towards me. I am delighted to be playing the role of Jeetuji as he is someone who I can relate to. My fans and viewers will see the various shades of my character, who tries to reunite Anuj and Gauravi, and I'm sure they will like my short stint in this show. I've been an avid fan of the show since its first season and I hope that Baarish Season 2 goes on to become a huge success." 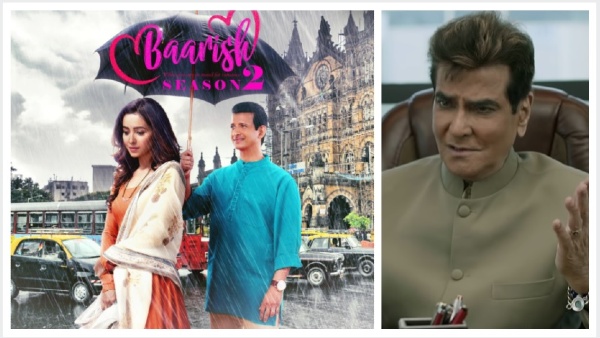