Story: Four More Shots Please! follows four unapologetically flawed women in their 30s and in their early 20s as they live, love, make mistakes and discover what really makes them tick through friendship and shots of tequila, in millennial Mumbai.

Review: Four More Shots Please! Season 2 is more about the girls growing up, now that they have already had the coming of age experience. In season one, they learned who they are and after making mistakes, they are now learning to deal with them. Watching Four More Shots Please! is like watching a Disney show for women, telling them to make their own choices but to be wary of the consequences.

Four More Shots Please! Season 2 starts with a recap of how bad things had got at the end of Season 1. But in the new season, Damini Rizvi Roy (Sayani Gupta), Anjana Menon (Kirti Kulhari), Umang Singh (Bani J) and Siddhi Patel (Maanvi Gagroo) all get a clean slate with minimum to no consequences.

Siddhi, while on a backpacking trip in Europe, begins to miss her friends and calls back home in a drunk state, making everyone worry about her state of mind. Damini, Anjana and Umang quickly run out to save the baby of the group, only to find out that the past four months have been very different for each one of them.

From here on, the show picks up on their individual stories. The creator Rangita Pritish Nandy and writer Devika Bhagat also bring in other everyday female struggles into the script like, sexism at the workplace, body shaming, right-wing fanaticism, freedom of expression, trolls, political oppression, parenthood and infidelity. But this time, they are doing most of it the right way, without any drama, at a somewhat realistic scale.

Nobody expects these women to make the right decisions all the time but to make the same mistakes again within a few months, it's hard to believe. Anjana who is 30 and just lost her job because of a misogynistic man, agrees to an open relationship, without realising that it will also put her job at risk. The flow of time for between the 10 episodes is questionable, as at times several episodes pass and you have only passed two days for one character but for another character, its been weeks.

Compared to the previous season, the writers have focused more on the message and tone of the show. Some scenes and majority of the dialogues come off patchy, but the leading ladies did the best they can. In certain scenes, it is hard for the actor to convince the audience because they don't look convinced themselves. On the other hand, the men in the show look exceptional and are very grounded in their character. Neil Bhoopalam, Milind Soman and Prabal Panjabi play supporting roles that we would definitely root for.

But even after all this, you continue to watch the show, because you resonate with these women, their privileges and some tough unavoidable choices. They don't make you feel alone and as for the drinking and talking about female genitals, it has become more classy and on a need-to-know basis than in the previous season. Four More Shots Please! Season 2 will keep you hooked on for the first five episodes and by that time, there is only five left, so you anyway will finish it in one sitting. 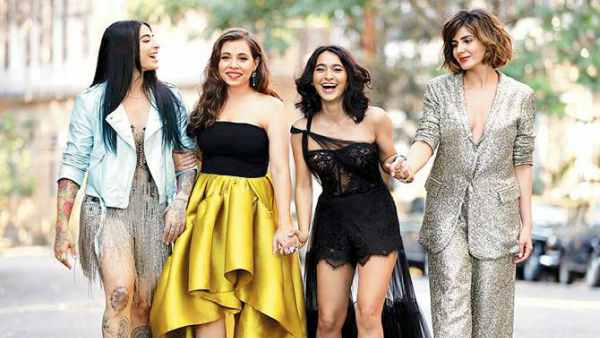 Four More Shots Please! Returns Tomorrow, Here Is A Recap Of Season One