The 12th Gold Awards was held on October 11, in Mumbai. The event, which was hosted by Nakuul Mehta, Barkha Sengupta and Paritosh Tripathi, was graced by who's who of the television industry. The event not only honoured the actors for their contribution to the television industry but also presented the awards to the actors for their contribution to OTT (web series) platform. Sunny Leone, Kunal Jaisingh and Tisca Chopra were a few actors who bagged awards.

Sunny Leone, who attended the awards ceremony along with her husband Daniel Weber, bagged OTT Icon of The Year Award. The actress shared a picture and captioned it, "Thanks @goldawardstv for Icon of the Year!" - (sic). Daniel also shared a few pictures and wrote, "Because she deserved every bit of this !!!! @sunnyleone #karenjitkaur @zee5 !!!! Icon of the Year !!!" - (sic)

Kunal Jaisingh shared a picture snapped with the award and captioned it, "What a night it was full of glitz and Glamour a huge huge congratulations to my main man @vikaaskalantri and @priyankavikaaskalantri and huge thank you for awarding me with the most stylish male OTT (web) award... it was such an honour to receive this award... simply an unforgettable night..." - (sic)

Ronit Roy bagged the Best Actor Award (Male). His wife shared a few pictures and videos from the ceremony on her Instagram stories. She captioned a video, "Congratulations."

Kubbra Sait, who was seen in the web series Sacred Games, also bagged an award at the 12th Gold Awards event. She looked stunning in an olive Alina Cernatescu dress.

Producer of Kaafir, Siddharth P Malhotra thanked everyone for the love and the awards on behalf of his team. He wrote, "The love for #kaafir carries on.Thank u for these awards on behalf of my team @bhavani.iyer and me @diamirzaofficial @merainna @chinxter @zee5 @sapnamalhotra01 my brother @milxind and the one man who let me tell this story and got in when no one would @tarkat07 #tarunkatial #alchemyfilmspvtltd" - (sic) 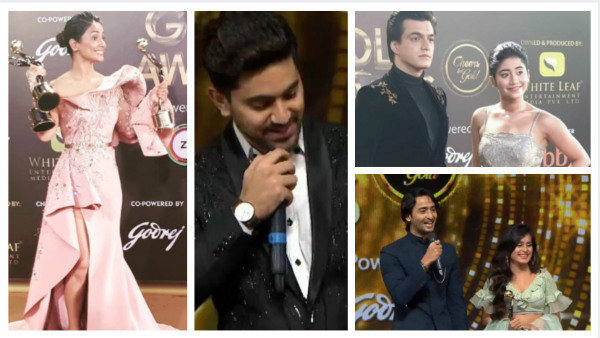