Where to watch: Voot Select

The onset of the COVID-19 pandemic was a testing time for humanity not only when it came to physical coping, but also when it came to battling the inner turmoils. Voot Select's Love In The Times Of Corona presents three different stories of powerful women, who push themselves to face their vulnerabilities in the midst of a raging pandemic.

What's Nay: The three stories though impactful, does not present anything new on the table

Love In The Times Of Corona revolves around three stories namely Dinner In Lockdown, Short Hello and Tea And A Rose. Dinner In Lockdown starring Shibani Dandekar and Shekhar Ravjiani in the lead roles showcases a couple who seemingly have the perfect life at the surface but are soon propelled to face the harsh realities of their relationship, that is triggered by broken glass.

Short Hello starring Dipannita Sharma is about a divorced woman trying to cope up with her regular life amidst the lockdown. However, a tint of nostalgia and repressed emotions come rushing when she reconnects with her past.

Tea And A Rose is about two middle-aged individuals who have lost their respective spouses and have an unexpected meeting with each other in the grim scenario of the pandemic. What follows is an endearing companionship between the two.

Indrani Ray's intricate direction has caught the nuances of the female protagonists catering to their matters of the heart as well as not hiding their vulnerabilities. The drastic change that the pandemic has bought into people's lives that was characterized by occasional video calls, phone calls and keeping in touch with the newspapers has also been captured well. Be it a struggle of a couple or an acceptance of change for a middle-aged woman, all the three stories and their characters are heartwarming and have a sense of realism. However, the stories delve into a slightly 'done and dusted' formula be it motivating a partner to come out, reconnecting with an ex-partner or giving love a second chance. It is not something that people haven't seen before. Also, the pandemic had opened up many more extreme and harsh brutalities for many people, who may not be in sync with the emotional turmoils of the lead protagonists when it comes to the definition of struggle in the midst of the pandemic. 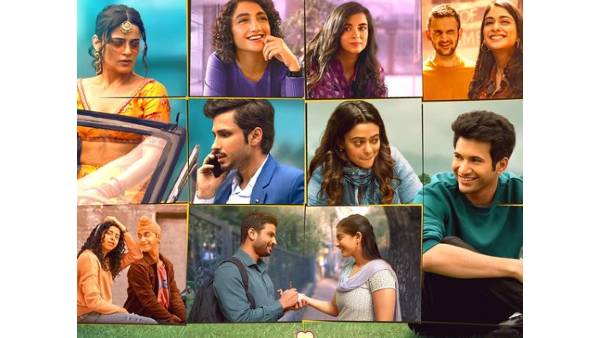 In Dinner In Lockdown, Shibani Dandekar breathes life to her character of a wife who finally comes to the saturation point of having to face the brutal reality of her 'perfect life.' Shekhar Ravjiani displays a charming yet subtle act while playing a husband who is struggling to come out of the closet.

Dipannita Sharma goes sans any dialogue in Short Hello but that does not hinder her seamless performance. Her character's hesitancy yet excitement while reconnecting with her ex-husband is portrayed beautifully.

Lastly, in A Tea And A Rose, Natasha Rastogi and Adil Hussain are a delight to behold. The camaraderie between them as they reminisce about the old times and see a bond igniting between them is endearing to witness.

Karan Thapliyal's cinematography in subtle shades of monochrome depicts the meandering emotions of the protagonists successfully. The film captures the tense backdrop of the raging pandemic effortlessly. The background score acts as a good catalyst for the plot.

Watch this one for Indrani Ray's compelling and heartwarming writing and execution. It is at the end of the day a testament to the relationships that were put to test in the middle of the COVID-19 lockdown. We give Love In The Times Of Corona 3 out of 5 stars.