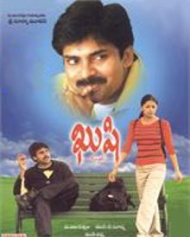 Romance
Release Date : 27 Apr 2001
Cast : Pawan Kalyan, Bhumika Chawla
Director : S.J. Surya
Synopsis
Khushi movie is an remake verison of tamil movie Kushi. this movie is an Romance based movie in which, Siddardha Roy, who is fondly called as Siddu, is all set to go to Canada after securing the admission for doing his MS.

On the other hand, Madhumita, who is fondly called as Madhu, is all set to engage a guy whom her father has chosen. But the destiny has other plans for them. Siddu meets with an accident and gets hospitalized.

The guy with whom Madhu is supposed to get engaged elopes with his secret sweetheart. And Madhu and Siddu get an admission in the Nizam college of Hyderabad.

They meet each other and find that they have lots of things in common and are made for each other. But there is one catch. They want others to express the love to them...