Mahesh Babu, the resident 'Prince' of Telugu cinema, will soon be seen in the eagerly awaited Sarileru Neekevvaru, one of the biggest movies of 2020. The film, directed by Anil Ravipudi, has already created a great deal of buzz in the industry and this suggests things are heading in the right direction. Now, here is some superb news for 'Super Star' fans. According to a leading website, the teaser of Sarileru Neekevvaru is going to be a feast for the Mahesh army.

Apparently, the teaser features several massy patriotic dialogues, which might give moviegoers goosebumps. The confrontation between the Spyder hero and 'Lady Amitabh' Vijayashanti too has been highlighted stylishly.

Mahesh Fans In For A Treat

The grapevine also suggests that Sarileru Neekevvaru teaser focuses on Mahesh Babu's reel swag, elevating his heroism to the next level.

Anil Ravipudi had previously said that the Sarileru Neekevvaru teaser has been designed keeping in mind Mahesh Babu's mass hero image. He had also implied that it will feature him in a new avatar. These reports suggest that he might be right.

In case, you did not know, Sarileru Neekevvaru is an action-comedy that revolves around the exploits of an Army officer, who is scared of blood. It stars 'Kodava Beauty' Rashmika Mandanna as the leading lady and marks her first collaboration with Mahesh Babu. A while ago, the Geetha Govindam actress had said that she felt happy to be a part of the film.

"Ahhh.. finally.! 😁I know alot of you have been asking me about this-

YES! I am part of this wonderful team and I am super kicked about it. Super excited to be working with @AnilRavipudi @urstrulyMahesh @SVC_official @GMBents @AnilSunkara1 @ThisIsDSP," (sic) she had tweeted.

Meanwhile, Mahesh Babu has already finalised his next move. Once Sarileru Neekevvaru hits screens, he will reportedly be joining hands with KGF filmmaker Prashanth Neel for a pan-India entertainer. 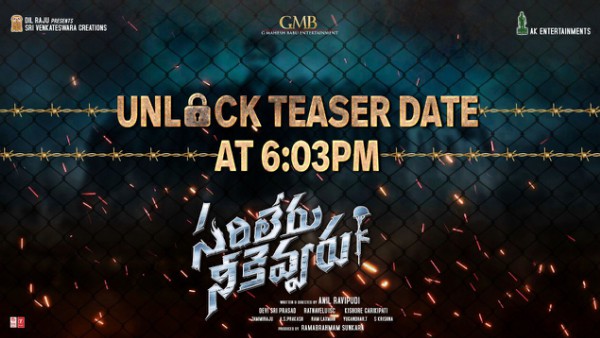 Sarileru Neekevvaru Teaser To Release On November 22; #UnlockSLNTeaserDate Is Trending!