It is no secret that Ram Charan is one of the most sought-after and popular young actors in the Telugu film industry today. The 'Mega Power Star' enjoys a strong and enviable fan following thanks to his impressive screen presence, macho looks and down-to-earth nature. Now, the heartthrob is in the news for a rather shocking and embarrassing reason. The actor's much-hyped Vinaya Vidheya Rama, which hit the screens on January 11, 2019 amidst fanfare has ended its box office run and the final result is disappointing.

According to the latest reports, VVR has managed to collect a share of Rs 62.85 at the worldwide box office and ended its run on an underwhelming note. Most distributors have suffered big losses because of the debacle.

Were The Stakes Too High?

Vinaya Vidheya Rama had raked in nearly Rs 90 Crore prior to its release and become the talk of the town. The extraordinary pre-release business was a shot in the arm for 'Mr C', however, it also raised the stakes to the next level. And, unfortunately, VVR failed to meet these expectations.

The WOM Was Negative

The general feeling is that Vinaya Vidheya Rama was a lousy and outdated action-drama and relied solely on excessive violence to create an impact. It also landed in a controversy because of Kiara Advani's raunchy intro scene and this did not help the cause. The decision to release it during Sankranthi too backfired as the content was not suited for the family audience. All these factors seemed to have contributed to its disastrous box office performance.

Even though the film is a disaster, there is some good news for the Mega fans. The very fact that Vinaya Vidheya Rama has managed to collect over Rs 60 Crore despite the negative WOM kind of proves that Ram Charan has evolved as a star and has own dedicated fan base.

What's Next For Ram Charan?

With VVR out of the way, Ram Charan has turned his full attention to RRR. The film is a multi-starrer and it also has Jr NTR in the lead. RRR is an SS Rajamouli directorial and has already created a great deal of buzz amongst the fans for all the right reasons. Mr C is also busy with Sye Raa Narasimha Reddy which has Chiranjeevi in the lead. 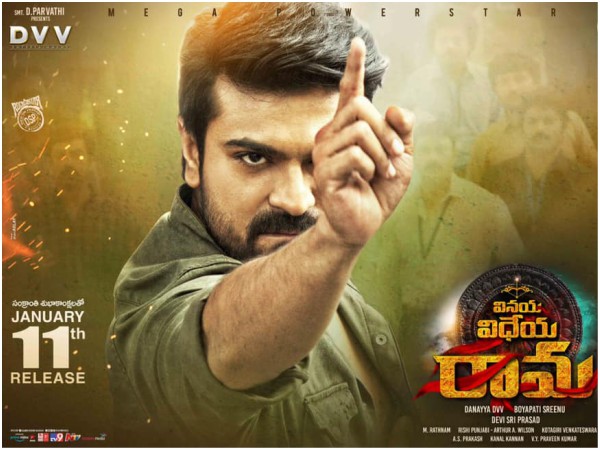 Vinaya Vidheya Rama Review: This One Is Only Meant For Ram Charan Fans!