Bheeshma, starring Nithiin and Rashmika Mandanna joins the list of films that have been leaked online by infamous piracy website, Tamilrockers on its release day. The leak of the rom-com may highly affect its collection at the box office. Well, the movie has so far garnered a positive response. The sizzling chemistry between Nithiin and Rashmika has been loved by the audience. Bheeshma to release in Sun Nxt and Netflix platforms on April 25th.

Bheeshma revolves around a youngster desperate to find his lady love. He is later seen fighting the antagonist essayed by Jisshu Sengupta. The movie leaves a social message regarding organic farming at the end.

Recently, the movie was highly condemned by BJP Dharmik Cell Convener Tumuluri Sri Krishna Chaitanya, Principal Secretary Rathakaram Ramu and others demanding a change in its title. They had alleged that using the name of the great warrior Bheeshma from Mahabharat as a title for the film may hurt the sentiments of Hindus. Few BJP leaders had warned the makers to change the title ahead of the release stating that Bheeshma was known for his pledge of celibacy and using his name for the title of a lover boy story is an insult.

Bheeshma is directed by Venky Kudumula and bankrolled by Suryadevara Nagavamsi under the banner Sithara Entertainments. Initially, the movie was slated for a Christmas release but later was scheduled for February 21st. 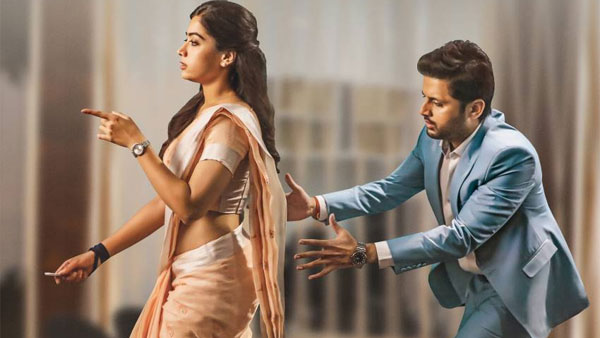