Vijay Deverakonda's upcoming film tentatively titled as Fighter is reportedly getting affected by the ongoing nepotism row in the Indian film industry. For the unversed, Karan Johar is jointly producing the film with Charmme Kaur and Puri Jagannadh. Amidst all, a report published in a leading portal suggests that Fighter's shooting schedule is getting delayed due to Karan Johar.

Well, after Sushant Singh Rajput's tragic death, fans started criticising Karan Johar for favouring star kids in the industry. In this case, Fighter stars Ananya Panday as the female lead, who is notably the daughter of actor Chunky Pandey. On the other hand, Vijay Deverakonda's team has maintained silence about resuming shooting of Fighter as KJo is reportedly yet to decide about the same.

If he decides to start the next schedule, the producer might choose Hyderabad over Mumbai due to the ongoing ruckus happening in the city of dreams. However, there is no official confirmation about the same.

Also Read : Ramya Krishnan Feels Vijay Deverakonda & Ananya Panday's Next Is Going To Be 'Almost A Baahubali'
Talking about Fighter, the makers have already shot 40 per cent film in Mumbai which includes some high octane action sequences. The film also stars Ramya Krishnan and Ronit Roy in pivotal roles. The pan-India project will be shot in Telugu and Hindi. It will reportedly be dubbed and released in Tamil, Malayalam and Kannada as well. 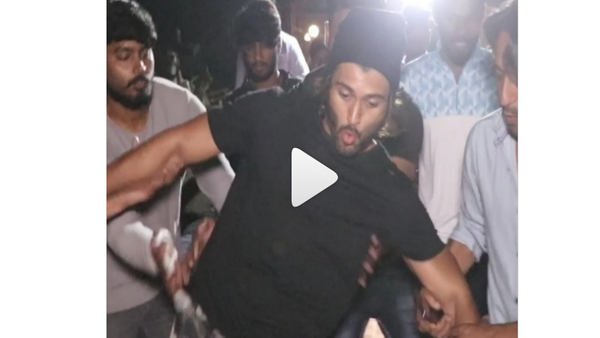