Keerthy Suresh turned 28 today and on this special day, the Mahanati actress received a special birthday wish from Tollywood superstar Mahesh Babu. The actor recently confirmed that Keerthy Suresh will star in his next Sarkaru Vaari Paata, directed by Parasuram.

On the occasion of the National Award-winning actress' birthday, Mahesh Babu took to Twitter and wrote, "Here's wishing the super talented @KeerthyOfficial a very happy birthday!! Team #SarkaruVaariPaata welcomes you aboard!! Will make sure it's one of your most memorable films💥💥💥 Have a great one !!."

Overwhelmed with the superstar Mahesh Babu's gesture, Keerthy Suresh thanked him for a grand welcome. She replied to him by tweeting, "Thank you so much Mahesh Babu sir. Delighted to be working with you for the first time and really looking forward to this! #SarkaruVaariPata @urstrulyMahesh @ParasuramPetla @MythriOfficial @14ReelsPlus @GMBents @MusicThaman."

For the unversed, a few weeks ago, reports were stating that Keerthy Suresh was replaced by the team. However, Mahesh Babu's latest tweet has finally given an official confirmation about her casting in Sarkaru Vaari Paata. The music of the film will be composed by S Thaman.

Also Read : Sarkaru Vaari Paata: Is Keerthy Suresh Not A Part Of The Mahesh Babu Starrer?

Talking about Keerthy Suresh, the actress will next be seen in Narendra Nath's directorial venture Miss India, Good Luck Sakhi with Nagesh Kukunoor, Aadi Pinisetty and Jagapathi Babu and lastly Rang De opposite Nithiin. Her last film Penguin was released on Amazon Prime Video, Keerthy managed to impress fans with her solid performance. 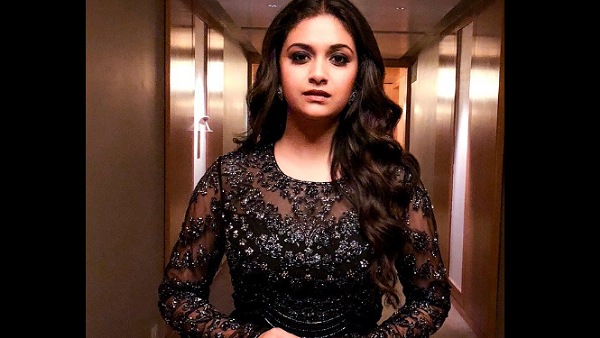 Also Read : Keerthy Suresh To Tie The Knot Soon? Is This The Reason Behind Rejecting Film Offers?