Did the Keerthy Suresh-starrer meet the expectations of the audience? Read on to know..

Manasa Samyuktha (Keerthy Suresh) who hails from a middle-class family from Andhra Pradesh's Lambasingi is shattered after her father is diagnosed with stage 5 Alzheimer's Disease and her grandfather's sudden death. She along with her family relocate to the USA after her brother gets a job at the American University. As she completes MBA (Masters in Business Administration) from a top university, Samyuktha dreams of starting her own business. She confronts disapproval from her family, that instructs her to settle down in life.

A determined Manasa is seen moving out of the house to chase her dream against the will of her family. She plans to do Indian chai business in America, after getting inspired by her late grandfather's medicinal tea recipe. Though the young lady is seen struggling with capital and assets for the Miss India tea business, her exemplary plans help her succeed and even compete with the coffee tycoon of America, Kailash Shiva Kumar (Jagapathi Babu).

With a neck and neck competition with Kailash, Samyuktha proves that Chai indeed has a place in the coffee land.

Miss India is a simple yet inspiring tale that lacks essence mainly because of the script. The storyline has been crafted in such a way that it clearly fails to explain the need for certain characters and situations in the film. There is a shear lag and in a few places, the story goes off the track and misses the actual theme of the film.

On the other hand, the technicality of the film including color and the sound is well balanced.

Keerthy Suresh: The National Award-winning actress has done an impressive job with her role as Manasa Samyuktha. Her performance, impeccable dialogue delivery and gestures lift the tale, making Miss India a watchable movie. It wouldn't be wrong to say that the charming actress is the show-stealer of the film.

Jagapathi Babu: The versatile star's acting chops as Kailash Shiva Kumar are highly appreciable. Jagapathi acts even with his eyes in the movie, that garners the attention and makes us watch more of his villainy avatar.

Dani Sanchez-Lopez and Sujith Vaassudev's cinematography deserve huge applause. The close-ups of the chai making at the beginning of the film will thrill you regardless of you being an ardent chai lover or not. The visuals indeed blend smoothly with the story. S Thaman's music composition has done complete justice to the film. A total of 3 songs are included, among which Shreya Ghosal's 'Kotthaga Kotthaga' is a feel-good track that is pleasant to the ears.

Miss India is an ambitious project that fails to impress the audience. Though Keerthy Suresh and Jagapathi Babu managed to steer the film to an extent with their performances, the storyline had nothing great to offer. 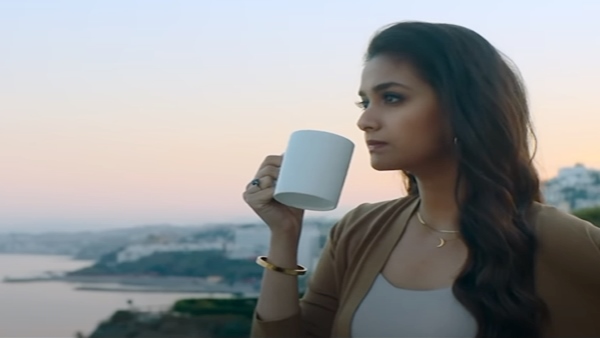 Miss India Trailer Out! Keerthy Suresh Is Here To Impress You With 'Real Indian Chai'