It's indeed a big day for Ram Charan! The makers of his next RRR (Roudram Ranam Rudhiram) have shared a brand new first look video of the actor on the occasion of his birthday. He looks menacing with a twirled mustache in the introductory video of Alluri Sitarama Raju. The character played by Mega Power Star of Tollywood, represents fire in the whole video and looks fierce.

Keeping in mind the 21-day nationwide lockdown due to the Coronavirus scare, Jr NTR and the makers decided to give a digital gift to Ram Charan, at 10 am today, but was later pushed to 4 pm release. Unveiling the Ram Charan's first look video as Alluri Sitarama Raju, Jr NTR wrote, "As promised, I give you

As promised, I give you @AlwaysRamCharan!
Happy birthday brother! Will cherish our bond forever.#BheemforRamaraju https://t.co/nCiO2YLgs2

Here is the first look video of Ram Charan from RRR

He had earlier apologized to Charan for the delay and had written, "Sorry brother @AlwaysRamCharan . I sent your gift to Jakkanna @ssrajamouli last night for his opinion. Being Rajamouli, you know how it goes. Small delay.."

Ram Charan, replying to the same and poking fun at SS Rajamouli, tweeted, "What!!

Sorry brother @AlwaysRamCharan . I sent your gift to Jakkanna @ssrajamouli last night for his opinion. Being Rajamouli, you know how it goes. 🤦🏻‍♂️
Small delay..

After making his Twitter debut yesterday and today being his birthday, the first look marks a triple celebration moment for Ram Charan. He is enjoying 148.3 k followers and counting in the microblogging site.

Coming back to RRR, the recent motion poster had the duo in their respective fierce avatars. Ram Charan was seen representing fire while Jr NTR signifying water, who later unite to create the title of the film. Interestingly, the faces of both actors were not clearly visible in the one-minute duration poster. 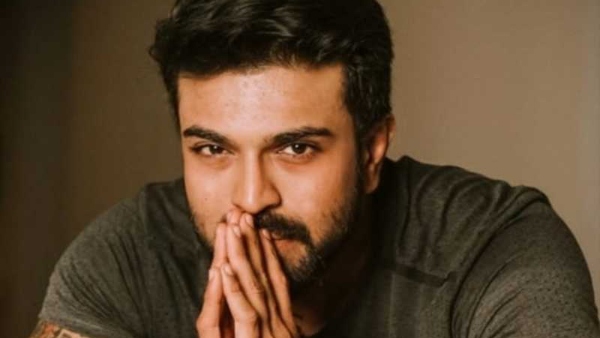