It's a known fact that SS Rajamouli's leaves no stone unturned to bring perfection to his work. His movies Baahubali-The Beginning and Baahubali-The Conclusion are the biggest examples of him being established as one of India's most reliable directors.

Well, Rajamouli is currently being trolled on Twitter, by none other than the actors from his RRR (Roudram Ranam Rudhiram) movie. Jr NTR and Ram Charan poked fun at the director for the delay in unveiling a special gift today, on the occasion of Charan's birthday. Earlier, Jr NTR had announced that a digital gift would be out today at 10 am. Well, his tweet notifying the delay suggests that Jr NTR had sent the gift to Rajamouli, for his opinion last night. He tweeted, "Sorry brother @AlwaysRamCharan . I sent your gift to Jakkanna @ssrajamouli last night for his opinion. Being Rajamouli, you know how it goes. Small delay.."(sic)

Sorry brother @AlwaysRamCharan . I sent your gift to Jakkanna @ssrajamouli last night for his opinion. Being Rajamouli, you know how it goes. 🤦🏻‍♂️
Small delay..

Poking the director, Ram Charan who made his debut recently on Twitter replied asking if he will get it today or not. He tweeted, "What!! You sent it to HIM!!?? Will I get it today??

Responding to the tweet and announcing the confirmed time, Jr NTR has replied to Charan's Tweet that the video will be out at 4 pm today. He wrote, "Yes bro @AlwaysRamCharan. Just checked with Jakkana @ssrajamouli. He's saying 4 pm for sure." (sic)

Well, the amusing tweets between the actors have gained the attention of the netizens, who are also eagerly waiting for the special gift.

Talking about RRR, the makers recently unveiled the first look motion poster of the epic action film which received a positive response from social media. Bankrolled by DVV Danayya, the movie will have Ajay Devgn, Alia Bhatt, Olivia Morris, Alison Doody, and Ray Stevenson in pivotal roles. Set in the backdrop of pre-independent India, RRR will have a Makar Sankranti release on January 8, 2021. 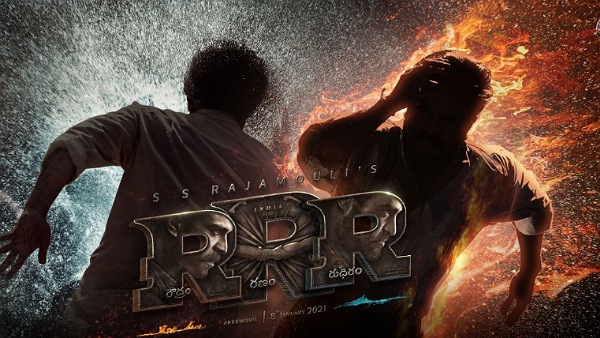 RRR: Ram Charan's First Look To Be Unveiled By Jr NTR Gets Delayed!