For a while now, rumours have been rife that Vijay Deverakonda only wants to work with big-shot directors and producers, as he is going through a crucial phase in his acting career. In fact, for the same reason, it was being said that the handsome hero didn't want to collaborate once again with his Arjun Reddy director, Sandeep Reddy Vanga, as he is pretty new in the industry.

But going by Vijay's latest interaction with Sandeep on Twitter, it seems like the former is more than willing to team up with the latter. And why not? After all, Vijay became an overnight sensation, courtesy Sandeep's directorial debut, Arjun Reddy. Not only did the movie perform well at the box office, but it also made Vijay a household name within no time. Arjun Reddy became such a rage that Sandeep remade it in Bollywood as Kabir Singh and again, witnessed phenomenal success.

Anyways, coming back to the present situation, yesterday, Sandeep Reddy Vanga praised Vijay on Twitter for raising funds through his foundation, to help the needy during the Corona crisis. The talented filmmaker tweeted, "Alloys are a homogeneous mixture of two or more metallic elements like Iron, Steel, Bronze & Titanium to achieve a greater strength to withstand against all sorts of calamities, corrosion & chemical reactions. And you have a pair made out of it. Great & gutsy @TheDeverakonda."

To this, the 30-year-old quickly replied, "I miss you Vangaa. Please finish 2-3 scripts in lockdown...I cannot wait 2 years to shoot.." Isn't that sweet? Well, now that Deverakonda has openly asked Sandeep to join hands with him, let's hope they do come together for a film as soon as possible. For now, Vijay has Puri Jagannadh's Fighter on his plate, which will mark his debut in Bollywood. The film also stars Ananya Panday in the lead. 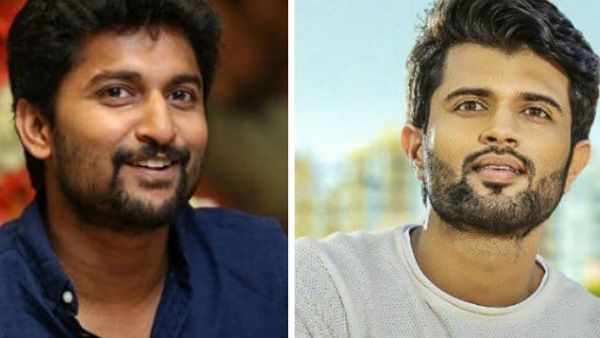 Nani Or Vijay Deverakonda, Who Will Koratala Siva Work With Next?