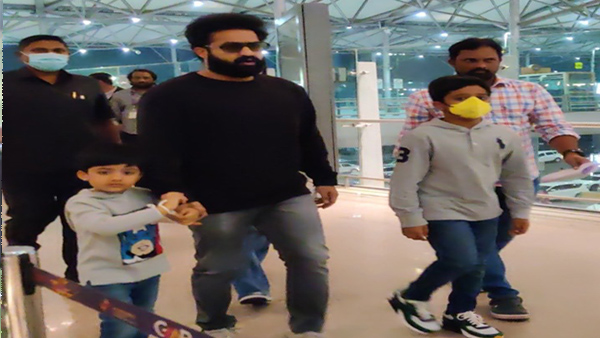 Jr NTR aka Tarak, who is awaiting the shooting of his next two films NTR 30 and NTR 31, is currently spending more time with his family. The young tiger, as fans fondly refer to him, is a family person and gets together with his close group of friends only.

The actor who portrayed the character of Komaram Bheem in SS Rajamouli's RRR movie along with Ram Charan gained new fans from all over the world. He was quite popular in Korea and Japan even before RRR was released but the fandom Tarak now enjoys is rather huge. Back home, Tarak is touted as the best actor and an incredible dancer.

A picture of Tarak with sons Bhargav Ram and Abhay Ram walking into the airport on December 9 surfaced on the internet. Sources reveal that the actor is on a long family vacation for about a month. The actor is said to have flown to the USA to spend Christmas and New Year's Eve. He is expected to return in the middle of January.

The last time we saw Tarak on a vacation was in Europe with family. A few pictures from their vacation were shared on social media. Since there is so much time for the actor to get back on movie sets, he took the opportunity to tour another country with his entire family.

NTR @tarak9999 leaving on a month long personal holiday with his family. pic.twitter.com/OxZNteEtdV

NTR 30 with director Koratala Siva, who earlier collaborated with Tarak and Mohanlal for Janatha Garage is getting delayed due to several reasons. Fans of the actor are also vexed about it. They are dissatisfied with the actor's upcoming projects as his co-star Ram Charan is already shooting for two films simultaneously after the release of RRR.

Director Koratala Siva is currently working with musician Anirudh Ravichander for the film's music. The film's cast and crew including the female lead are yet to be announced. It was learned that Keerthy Suresh had rejected the offer by NTR Arts and Yuvasudha Arts banners bankrolling the film.

After Prashanth Neel wraps up the work of Prabhas starrer Salaar, the shooting of NTR 31 will go on floors.