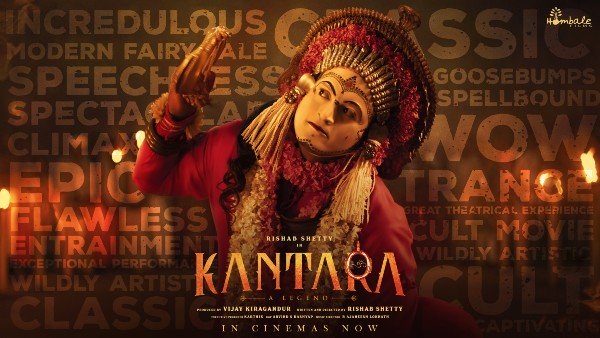 Kantara, one of the blockbuster hits of the year 2022 is finally available on Amazon Prime Video to stream digitally from November 24. The movie, which is written and directed by Rishab Shetty, who is the film's protagonist, is available to stream in Kannada, Tamil, Telugu, and Malayalam. However, fans of Kantara and regular film buffs are sulking about the absence of the 'Varaha Roopam' song.

Kantara released along with Mani Ratnam's Ponniyin Selvan 1 on September 30. It amassed great reviews and acclaim from the critics as well. It turned out to become a huge success after being dubbed and released into other major southern languages and Hindi. The movie's success is primarily credited to the song 'Varaha Roopam', played during Bootha Kola performance in the film.

However, after becoming quite popular, Thaikkudam Bridge music group, who are the original composers of the 'Varaha Roopam' tune slapped a complaint against the makers of Kantara citing plagiarism. The troupe's 'Navarasam' was made before 'Varaha Roopam' and it is more or less the same.

The court ruled in favour of the Thaikkudam Bridge troupe and ordered Kantara producers not to exhibit the song. The movie finally made it to the OTT but fans are miserable that there is no 'Varaha Roopam' song. Meanwhile, Vijay Kiragandur of Homable Films, who made Kantara appealed to Kerala High Court against the injunction of the song's use, which was dismissed.

Check out a few Tweets here:

#KantaraOnPrime Feel this bgm,🔥 but new version is 😡🤮 varaha roopam theatre version was materpeice, please try to add this song or remove the movie from Amazon prime.#varaharoopam pic.twitter.com/ImPuSIXYtK

@shetty_rishab please bring back #varaharoopam song, disappointed with the ott version!!! #KantaraOnPrime
This songs and the bgm hits very hard because of this we went for the theatres for many times now they not having this version Big disappointment💔#Kantara #KantaraMovie pic.twitter.com/uo2sLJuRKT

#Kantara film had a soul that dragged audience to theatres and took them into divinity trance. And that is #VarahaRoopam Original Version & the theatre experience with @shetty_rishab expressions was Dope.💥

Sadly, in #KantaraOnPrime we have to deal with new version. Disappointed pic.twitter.com/S6fOSjO3gI

Kantara explores the conflict of man and nature, set in the backdrop of Dakshina Kannada Tulu Nadu, reflecting on their cultures and customs. The movie stars Kishore, Sapthami Gowda, Achyuth, and Shine Shetty among others in crucial roles. The movie made over Rs 400 Crore worldwide post theatrical release.

Sapthami Gowda was cast as the film's female lead and Kishore Kumar, Vinod Bidappa, Achyuth Kumar, and Shine Shetty among others played crucial roles in the film. B Ajaneesh Loknath composed the tunes and background score of Kantara. KM Prakash and Prateek Shetty have worked as the film's editors. Arvind S Kashyap cranked the camera. Rishab Shetty had undergone a severe transformation for his role as Shiva. He did the Kambala fight sequence on his own without body double. He received worldwide recognition and applause for his efforts in making Kantara.