Nandamuri Balakrishna is in appreciation of the latest crime thriller HIT 2 aka HIT: The Second Case. The movie, written and directed by Sailesh Kolanu is the second installment of the HITverse. Adivi Sesh is the film's protagonist and played the character of an SP, Krishna Dev aka KD. Balakrishna, who was offered a special screening of the film, was quite impressed with the team of HIT:2, reportedly. 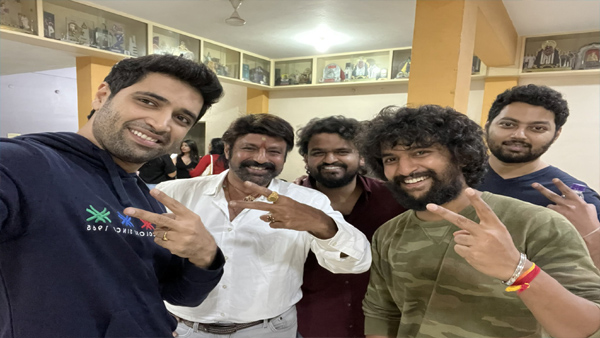 The film's co-producer and presenter Nani, along with Adivi Sesh and the writer-cum-director Sailesh Kolanu were present during the special screening of HIT: The Second Case. Along with them, Balakrishna's son, Nandamuri Mokshagna was also present for the screening.

Adivi Sesh has taken to his social media handle to share the news and wrote that he asked the Nandamuri actor to appear in a small role in the forthcoming films, which is an indirect hint, maybe.

He wrote,"sir ki super nacchindhi #HIT2 ! What lovely compliments from Balayya sir about
@KolanuSailesh
vision & my performance. I made a small joke that we request him for an appearance in the #HIT verse He smiled...but you never know! #HIT2 celebrations with big bro
@NameisNani." (sic)

#NBK sir ki super nacchindhi #HIT2 ! What lovely compliments from Balayya sir about @KolanuSailesh vision & my performance. I made a small joke that we request him for an appearance in the #HIT verse 😉He smiled…but you never know! #HIT2 celebrations with big bro @NameisNani pic.twitter.com/5y8e33ngFm

Meanwhile, the movie is receiving positive word-of-mouth at the box office. With no competition from other films, the movie is going strong and is expected to make a good profit. The movie had already achieved break-even in the Nizam area. Several other Tollywood actors and technicians were also tweeting good things about the movie, much to the happiness of the team.

Prashanti Tipirneni produced the film under the Wall Poster Cinema banner. Meenakshi Chaudhary was cast as the female lead in the role of Aarya. The film stars Harsha, Suhas, Rao Ramesh, and Posani Krishna Murali in crucial roles.

The movie's third part, HIT: The Third Case, will have actor Nani in the role of SP Sarkaar. His cameo toward the end of the film was a surprising element.

Garry BH edited the film while S Manikandan worked as its cinematographer. John Stewart Eduri worked as the background score composer while Suresh Bobbili and MM Srilekha composed the songs.