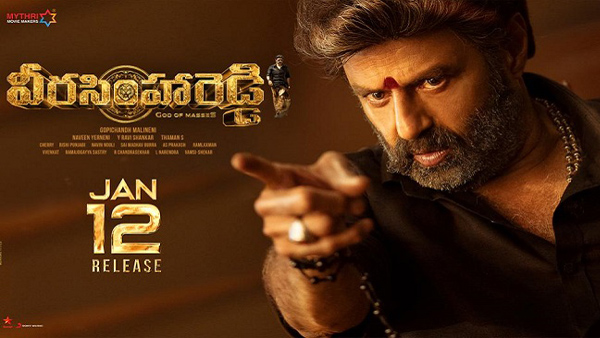 Nandamuri Balakrishna's latest action entertainer under the direction of Gopichand Malineni is all set for a theatrical release for Sankranthi 2023. On December 3, the makers of the film announced that NBK 107 AKA Veera Simha Reddy is going to hit the screens on January 12.

Balakrishna's film is officially joining the list of Sankranthi releases. Megastar Chiranjeevi's Waltair Veerayya, produced by the same filmmakers as Veera Simha Reddy, is also going to hit the screens for Sankranthi. Two big heroes like Balakrishna and Chiranjeevi are again clashing at the box office for Sankranthi after several years. On the other hand, Thalapathy Vijay's Vaarasudu and Ajith Kumar's Thunivu are also scheduled for release at the same time. This time, Pongal/Sankranthi is going to be special for the people of the two Telugu States and Tamil Nadu.

NBK 107 or Veera Simha Reddy stars Shruti Haasan as the female lead opposite Nandamuri Balakrishna, marking their first collaboration. The movie's title reveal, poster, and other publicity material including a song called 'Jai Balayya Mass Anthem' received a huge response from the fans of the Nandamuri family. High expectations are pinned on this film, which is coming after the successful NBK-Boyapati's Akhanda.

Mythri Movie Makers have bankrolled the film and S Thaman composed the film's tunes and background score. Rishi Punjabi cranked the camera and Naveen Nooli edited the film. Veera Simha Reddy is made on a budget of Rs 70 Crore.