It is indeed a surprise and shock to many Tollywood film buffs when director Sekhar Kammula confirmed his association with none other than Dhanush. The director is from a different school of cinema and Dhanush is an actor of full potential. Their collaboration raised a few eyebrows and finally on November 28, the makers of the film launched it officially with a traditional puja ceremony in Hyderabad. 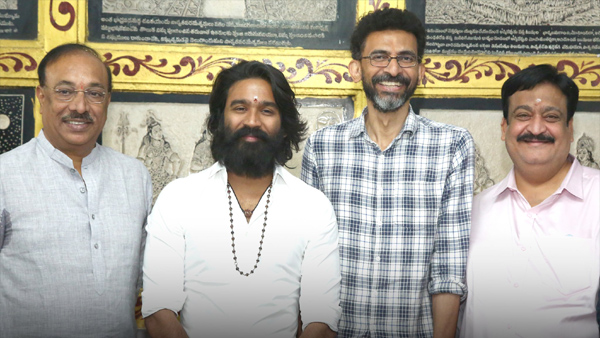 Dhanush sported a fully grown beard and hair look for the puja ceremony. The makers of the film- Sekhar Kammula, Puskur Rammohan, Nayarandas Narang were present on the occasion. The movie will be made in Telugu, Tamil, and Hindi as Dhanush has done a couple of Hindi films earlier.

Announcing the same, the film's producers SVCLLP and Amigos Creations have taken to their Twitter handle and wrote, "The Remarkable Moment is here for the Path Breaking Combo🌟

The Remarkable Moment is here for the Path Breaking Combo🌟

Most of them opined that GV Prakash Kumar or Santhosh could be the music directors of the film and Sai Pallavi, Sekhar's favourite, or Pooja Hegde will be the film's female lead.

The other details of the cast and crew will be announced soon, said the makers. The movie is being bankrolled by Sree Venkateswara Cinemas LLP together with Sekhar Kammula's Amigos Creations Pvt Ltd banner. Sonali Narang will present the film.

Meanwhile, Dhanush is also making his Tollywood debut with Venky Atluri's college drama titled Sir, a bilingual film made in Tamil as Vaathi. The movie is nearing completion and is all set to hit the screens in February 2023.