The wait is finally over. The much talked about Baahubali is finally at the theaters near to you. Before you catch it on the big screen have a glimpse of what you are in store to set your expectations right.

The story takes off with the birth of Shivudu (Prabhas) and as he grows up, he tries to reach his own fantasy world, which is on the hill top. Tamannah's arresting looks gives him the magical power to finish off that task effortlessly.

Soon the story tracks back to his original parents, Amarendra Baahubali and Devasana and the villain of their life Bhalladeva. Who is Bhallaladeva? What made Shivudu move apart from his parents form the plot of the story.

Prabhas lives up to the word Baahubali with his macho build and powerful looks. The hard work he has put in to make belief of the role is pretty evident. Both his roles, Shivudu and Amarendra Baahubali were larger than life and gives an instant high for mass movie lovers. Though we felt his dubbing could have been better, his looks, elevation shots and the back ground music made his job a little easier.

Rana Daggubati is a stunner and we think he has come out with an answer to the criticism he has faced all these years for his poor acting skills. His body language, appearance every thing resonated the evilness. and we don't mind saying he has out-shined Prabhas in one or two shots. Well! That's how Rajamouli's kind of villain has to be.

Anushka killed it with her amazing performance but her make up felt more like a ghost in the horror stories we usually see. A seasoned character artist would have been sufficient for her role if she is not doing a lead role in part 2.

Tamannah just looked like an angle in K Raghavdenra Rao's kind of glamorous avatar and a surprise get up of her's is surely a surprise. Satyaraj has got a role almost on par with Prabhas and Rana and let us tell you, Ramya Krishna is the actual show-stealer.

Baahubali as it is popularly known for, is a technical brilliance. But do not expect things to be out of the box or say something amazing other than the shots that you have seen in the trailer. Rajamouli seems to have compromised a little with his product since the story has been divided in to two parts.

The most talked about war episode lacks punch since there were neither any high octane dialogues nor a proper introduction to the Kalakeya. There should have been sub-titles to generate any impact for the entire episode since it features a new language specially written for the film. (Not sure if it's the same with all the screens)

Background score and music by M M Keeravani was good enough and the camera work by Senthil was outstanding. The VFX was poor in the first few minutes and it develops to be a visual treat in the later parts, especially in the shots of Mahishmati Kingdom.

There were of course some boring moments in the film like the item song in the second half. One must understand all the threads unsolved were the links to the second part and adapt the kind of narrative used, which is rare in Telugu movies.

Baahubali is a must watch for its grandeur and is definitely a movie to experience in theaters. However, in case of story telling it has nothing to offer as it has a beaten to death revenge drama as its plot.

The movie has its share of moments but the problem comes when you wish to watch a Epic from Rajamouli. So folks, set your minds free and fall in love with Baahubali. 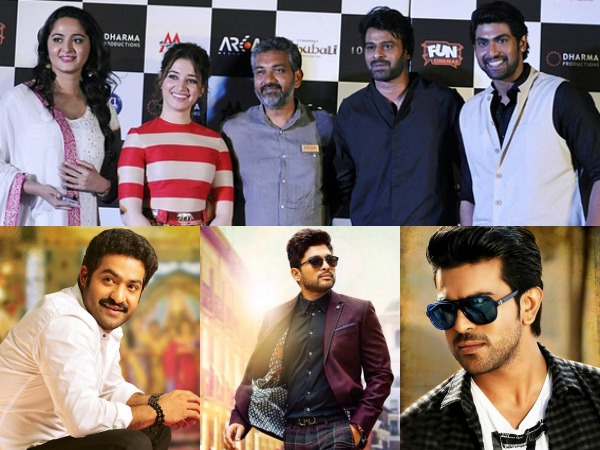 Baahubali is a tailor made role for Prabhas and it is hard to even think of replacement.

Few elevation dialogues uttered by Devasena increase the tempo of the film.

War episode gives you a never before kind of movie watching experience. Imagine how much hard work has gone in to it.

Baahubali features never seen before visuals in its each frame. One would have a tough time to figure out which a actual shot and which is created with CG.

Do let us know your review and rating after watching the film, in the comment box below.