Rudhramadevi offers to take you back to the 13th century and let you live in the Kakatiya dynasty. Read the review to know if Gunasekhar has really taken back to the era.

The story takes off with the narration of Italian merchant traveler Marco polo (Gary Tantony) about the legendary story of Kakatiya emperor Ganapatidevudu(Krishnam Raju), his dynasty and his daughter Rudhramadevi (Anushka).

Rudhramadevi is raised as a male to protect the interests of Kakatiya dynasty and gets married to Mukthamba (Nithya Menen).

Hariharadeva (Suman) and Murarideva (Adithya Menen), the cunning cousins of Ganapatideva plans to dethrone Ganapatidevudu while Mahadeva Nayakudu (Vikramjeet Virk), the arch rival of Kakatiya dynasty waits for a chance to go on a war.

On the other hand, Gona Ganna Reddy (Allu Arjun), a bandit in the Kakatiya kingdom turns against Kakatiya rulers and fights for the poorer sections of the kingdom. How did Rudhramadevi face all these problems of Kakatiya dynasty with her prowess forms the rest of the story.

Though Anushka is supposed to be the lead, Allu Arjun steals the show with his limited screen time. He worked to perfection on his look, diction and slang. For the coming years, you cannot take out the image of Anushka when you think about Rudhramadevi. She appeared as a perfect blend of royalty and vulnerability of a woman. Rana was just out of place though he tried to do justice to what he has been given.

Rudhramadevi is expected to be a technically rich film but unfortunately, it has come out as a half baked project considering its budget limitations. What ever the reasons might be, everything about it is mediocre. Poor CG work stops you at the doors of Kakatiya kingdom and rejects you to travel along.

Songs were just speed breaks while the artificial characterizations were mere bouncers. Illaiyaraaja's back ground music did not create any impact in the most important sequences, which has largely affected the film.

Thota Tharani's art work represents the rich architecture of Kakatiya's and the costumes by Neeta lulla added that rich feel to the film. Cinematography fell short of proficiency and can say 3D work killed the whole experience of movie watching while it is supposed to enhance further. Action sequences were lame as you can almost see that the actors were hanging with the ropes tied down.

The story that director Gunasekhar chose has everything that is commercially viable, which is a plus point in itself. A scene where Anushka and Prakash Raj talks about women and few other scenes involving Allu Arjun depicts the command of the director. However, the cinematic liberties he chose to take appeared lame and the jerky narration has left blemishes on the film.

The film starts on an intense note with Chiranjeevi's voice over, takes a pause on a high note at the interval and ends with an emotional climax keeping you on a wait for Pratapa Rudra. On the whole, though Rudhramadevi do not amaze you, it surely tugs you back to 13th century and it is a journey to witness. 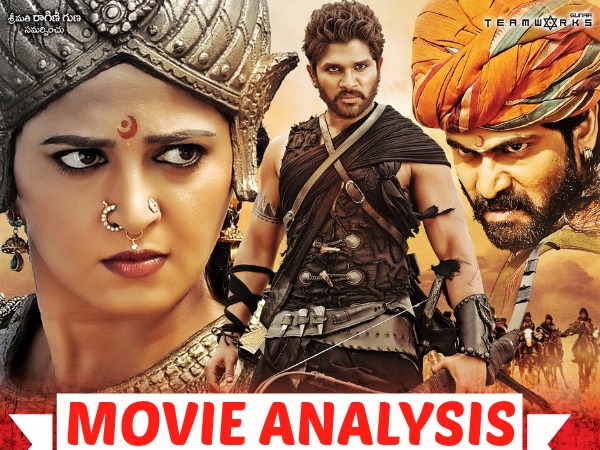 Do watch the film and lets us know your opinions.