Backed by Kalaipuli S Thanu and D Suresh Babu, the film was earlier slated to release theatrically in May 2021, however, the makers had to drop the plan owing to the second wave of COVID-19 pandemic.

Considering the fact that Narappa is the remake of a National Award-winning film, there has indeed been a lot of expectations since its maiden announcement. Did the Venkatesh-starrer live up to the expectations of audiences and critics who were eagerly waiting for the film? Let's find out! 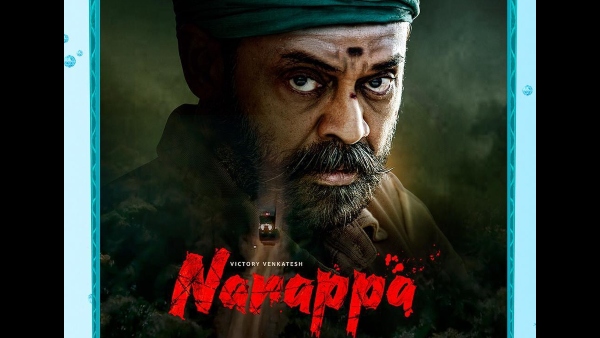 Rana Daggubati, Anil Ravipudi Are All Praise For Narappa Trailer; Say "Venkatesh Is Back With A Bang"

First things first, though Narappa is a scene-by-scene copy of its Tamil counterpart Asuran, one should probably not make any sort of comparisons, as doing so would be unfair. Having said that, one thing is definite that the Venkatesh-starrer has not let down the soul of the film's original version, which needs to be applauded.

The Srikanth Addala directorial follows Narappa (Venkatesh) and his family when his teenage son kills a local big shot, to avenge his brother's ruthless murder post a land dispute. In order to protect his hot-blooded son, Narappa takes him to different locations to escape the goons who are on a mission to track them down along with his family members including his wife (Priyamani), daughter and brother-in-law who are now scattered in different areas.

Though everyone presumes that Narappa is a submissive father who withdraws himself from situations out of sheer fear, a totally different version of the farmer is shown post the intermission, which emanates the reason why he later becomes a naive person. Will Narappa be able to save his son and the rest of the family members from the deadly goon and his minions? Well, you will have to watch the film on Amazon Prime Video to know what unfolds at the end.

As mentioned already, though the film is a scene-by-scene copy of Asuran, the director has tried his best to modify the original storyline to make it more appealing to the Telugu audience, which is evident in a few places. Even though there are slight modifications, Srikanth has not shaken the original soul of the film and it definitely needs to be appreciated.

Given that Narappa is a heart-wrenching tale, the director has made the best use of dark coloured palette, high dose of emotions and heart-rending music that incorporates well with the actual story. Though the action sequences featuring Venkatesh were also commendable, a few of them seemed less intense, presumably because of the slow-paced camera work. The touching dialogues of Venkatesh, Rao Ramesh and Priyamani have no doubt done wonders.

Venkatesh: The actor has the Midas touch to embrace a role and make it his own, and Narappa serves as proof for the same. The superstar has undoubtedly pulled off his character with utter ease. In most parts, it is his expressions and eyes that do all the talking. His nuanced performance, the way with which he carries different emotions that are extreme and dialogue deliveries simply proves that the rural drama is perhaps among his best undertakings. At times, we feel helpless watching him on screen pleading before everyone to ensure the safety of his son.

Priyamani: The actress plays the role of a strong-willed and emotional mother to perfection. Her effortless performance and combination sequences with Venkatesh are praiseworthy.

Be it the music composition, editing or cinematography, the right proportion of each and every aspect has only pushed the film forward and that too in a way that looks impressive. From the start till the end, Mani Sharma's background music and songs gel with the flow of the narrative. Editing by Marthand K Venkatesh has undeniably scored big time, as Narappa doesn't give way to unnecessary lags or sequences and maintains a focus throughout. Shyam K Naidu has done decent work with his lens. The sequences captured in the dark and daylight look convincing and lets the narrative take the course naturally.

This Venkatesh-Priyamani-starrer should not be compared with its Tamil counterpart Asuran, as it speaks for itself loud and clear. Narappa is high on emotion and dramatically impactful, all thanks to the actors' intense performances, to-the-point storyline, requisite action sequences, compelling music composition and of course the breathtaking cinematography. Overall, the Srikanth Addala directorial has its heart in the right place.