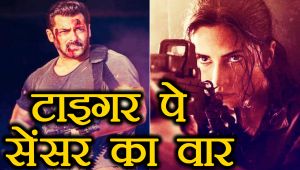 
Salman Khan and Katrina Kaif's Tiger Zinda Hai may face trouble from Censor Board. Censor Board asked Ali Abbas to remove the Love angle between Indian and Pakistani Raw agents played by Salman Khan and Katrina Kaif repectively. Tiger Zinda Hai is all set to release on 22nd December 2017, it is sequel of Kabir Khan's Ek Tha Tiger. Salman and Katrina are playing the role of Indian agent and Pakistani agent. CBFC told makers of Tiger Zinda Hai to change the nationality of Katrina Kaif in the film. Check out the video to know the reason behind. Is it the growing problem between India and Pakistan or something else? Watch the video to know more.
Follow Filmibeat On
Recommended for you
View More Movie Review Videos
Comments
Read more about:
Notification Settings X
Time Settings
Clear My notification inbox
Done
Clear Notification X
Do you want to clear all the notifications from your inbox?
Yes No
Settings X
0
No New Notifications
Close