The year 2020 began with a bang with a string of high-profile films hitting the theatrical screens. Some struck gold at the box office; some didn't. The audience was waiting with baited breath to watch big-ticket films like Akshay Kumar's Sooryavanshi, Salman Khan's Radhe: Your Most Wanted Bhai on the big screen. Unfortunately, the COVID-19 pandemic raised its ugly head, and the country was forced to go into a lockdown. With the theatres shuttered, some filmmakers held off their theatrical releases, while others took the OTT route. In short, the COVID-19 pandemic brought a major change in the way we consume entertainment. But, one thing remained constant- our love for good content.

With just few days remaining to bid farewell to the year 2020, we bring you our top picks of Bollywood films which released this year.

Who says history is a drab subject? Ajay Devgn and director Om Raut picked up a chapter from the past and turned it into a spectacle on the silver screen. With breathtaking visuals and commendable performances, Ajay Devgn's Tanhaji: The Unsung Warrior galloped straight into our hearts. Also, Saif Ali Khan's performance as Udaybhan was deliciously wicked.

Anubhav Sinha's Thappad shed light on the damaging sexism rampant in Indian homes where things are brushed under the carpet as 'ghar ki baat'. The film is a resounding slap on our society's belief that 'every behaviour is okay in a marriage.' Packed with powerful moments, this Taapsee Pannu starrer lingered for long even after the end credits rolled.

Ashwiny Iyer Tiwari and Kangana Ranaut teamed up together to give us a delightful film which spoke about how it's never late to chase your dreams. Kangana Ranaut's camaraderie with her co-star Richa Chadha on the big screen also warmed the cockled of our hearts.

Mohit Suri's Malang starring Aditya Roy Kapur, Disha Patani, Anil Kapoor and Kunal Kemmu, ticked most of the boxes when it comes to a good edge-of-the-seat romantic thriller. With a generous dose of twists and turns and some chartbuster music, the film succeeded in winning our hearts.

Sanjay Mishra's Kaamyaab is a treat for all cinephiles who have grown up watching retro Bollywood films. A heartfelt love letter to the 'extras' in films who fade into oblivion and always remain in the shadow of the stars, the film made us think, laugh and even shed a tear or two.

Late Irrfan Khan's Angrezi Medium beautifully captured the dynamics of single parenting and teenage freedom. Despite a few glitches here and there, the film made for a heartwarming watch. In Irrfan's words, it made us very emotional from inside and very happy from outside.

Dil Bechara, an adaptation of John Green's best-selling novel The Fault In Our Stars, left us moist-eyed when late actor Sushant Singh Rajput's character Manny quipped at one point in the film, "Will you miss me?" Unfortunately, just like his reel character, Sushant too, left for his heavenly abode too soon. Like always, it was the late actor who shone the brightest in Mukesh Chhabra's directorial debut.

Bhumi Pednekar-Konkona Sen Sharma's Dolly Kitty Aur Woh Chamakte Sitare left a lasting impression with its unapologetic take on women empowerment and female sexuality. With relatable characters and Alankrita Shrivastava's sensitive gaze as a filmmaker, this quirky film turned out to be all things fun.

Trust Anurag Basu to always charm us with his engrossing story-telling, and his ensemble film Ludo is no different! The director treated us with an entertaining game where each player (actor) played their role to perfection. Each time the dice was set in motion, we got plenty of moments to cheer.

Despite all the negativity surrounding the film owing to the nepotism debate post actor Sushant Singh Rajput's death, Janhvi Kapoor's Gunjan Saxena: The Kargil Girl soared high with its intriguing story-telling. Pankaj Tripathi left us mighty impressed with his role of a supportive father to Janhvi's character in the film.

The real-life story of a girl who never gave up on her dreams while battling the toxic masculinity and age-old patriarchy existing in the society, made for an inspiring watch. 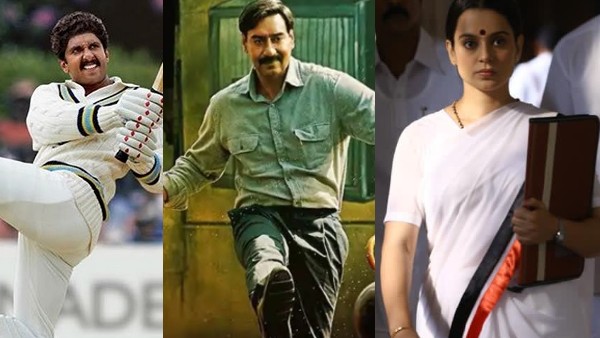 ALSO READ:'83, Maidaan, Thalaivi And Others; List Of Upcoming Bollywood Biopics Which We Can't Wait To Watch

ALSO READ: Bollywood Newcomers To Watch Out For In 2021: Shalini Pandey, Lakshya, Manushi Chhillar Gear Up To Dazzle On Big Screen