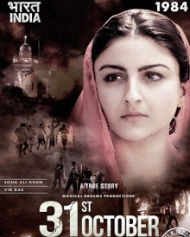 2 hrs 8 mins | Social
Release Date : 21 Oct 2016
Cast : Soha Ali Khan, Vir Das
Director : Shivaji Lotan Patil
Synopsis
31st October movie is based on the assassination of Indira Gandhi and what it led to. Set against the backdrop of 1984 anti-Sikh riots, the film is a true-life story of a Sikh family and their fight for survival.

The film is a depiction of one of the most important dates in Indian history, the day India lost its Prime Minister, Indira Gandhi.

She was shot dead by her own bodyguards, which changed the political scenario of the country to such an extent that many innocent lives were lost and India witnessed a black Wednesday. It is a story of human emotions, conflicts, survival and friendship.