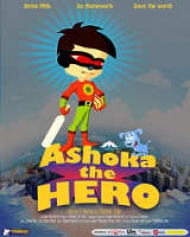 Animation
Release Date : 07 Jun 2014
Cast :
Director : Gaurav Jain
Synopsis
Ashoka The Hero is an animated movie and the time is 32 BC. King Asoka's fierce battle against Kalinga claims 100,000 lives & the carnage moves the king to go on a quest to save mankind.

He brings together the nine wise men from all over the world who harness the powers of nature and contain them in a medallion. The medallion is entrusted to the Emperor's son Masa until its rightful owner can be found.

2000 years later, Masa, still alive comes across a Ashok, the son of a slain police officer. The 8 year old has a great desire to help others like his hero father. Realizing Ashoka is the one he has been waiting foe Masa entrusts the medallion to the boy and the fades to dust, his mission accomplished.