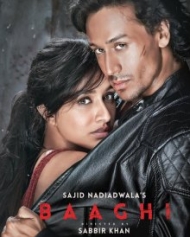 Inspired by Salman Khan - Nagma starrer of the 90s, the producer Sajid Nadiadwala stated that the concept of the Tiger Shroff starrer has the young actor playing the role of a rebel who can fight for love. Hence, the title!

Story in detail:
Tiger Shroff (Ronny) is a rebel, and his ailing father worries about his future and sends him to Kerala, to be disciplined and learn the art of Kalariypayattu (Martial Arts). The film is about two people (Tiger Shroff & Shraddha Kapoor) who meet during a train journey, and immediately fall in love with each other during the rain.

The rain, plays an important part in the film as Tiger Shroff, keeps bumping into Shraddha Kapoor...