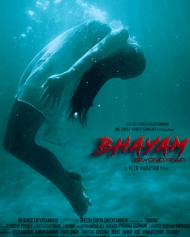 Horror Thriller
Release Date : 28 Dec 2022
Cast : Gaurav Chansoria, Ankita Kashyap
Director : Veer Narayan
Synopsis
The word Bhayam means Fear. The story is all about obsession for someone. Its a love story of Shree and Myra which no longer exists due to clashes between the families. Shree and Myra  were the film making students where they along with their others friends had gone to a haunted hills to shoot for their short film for their  final project. When they go to the hills for shoot they experienced some  supernatural activities. Group members started missing  Thus the obsession, thrill, horror and  action clearly defines the name of the film. It will be quite interesting to watch the film in the theatre as it has all the elements.