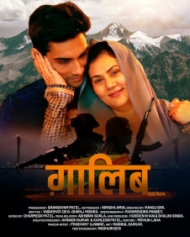 Drama
Release Date : 28 Apr 2021
Cast : Dipika Chikhlia, Nikkhil Pitaley
Director : Manoj Giri
Synopsis
The beautiful valley of Kashmir has been suffering from the menace of terrorism since the 90’s. Gaalib’s father was found guilty for the attack on Indian Parliament in Delhi and was sentenced to death. Before dying Gaalib’s father wanted Gaalib to focus his attention only in studies and not to tread the path taken by his father. After his father’s death, Gaalib’s mother starts raising him but even if she wants to do so, she fails to lead him to the right path. But Gaalib’s life reaches a turning point after meeting one of his school’s teachers, who brings immense change in his life with his positive thinking. Gaalib is highly influenced by him and eventually tops high school exams in the whole of Kashmir.