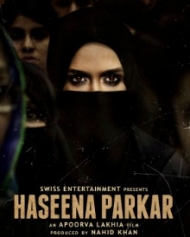 The film is based on Dawood Ibrahim's sister Haseena Parkar. The film marks Shraddha's first ever female protagonist role. For giving perfection to Haseena, Shraddha had gained oodles of weight.

Shraddha's brother, Siddhanth Kapoor portrays the role of Dawood Ibrahim in this movie.

The music for Haseena Parkar is composed by Sachin-Jigar. The lyrics were penned by Priya Saraiya, Vayu and Kirthi Shetty. Overall, the movie has 4 songs.