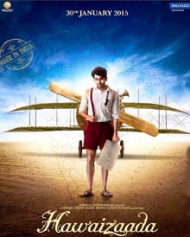 Biography
Release Date : 30 Jan 2015
Cast : Ayushmann Khurrana, Pallavi Sharda
Director : Vibhu Puri
Synopsis
Hawaizaada movie was earlier titled as Bambai Fairytale. The movie is based on the life of scientist Shivkar Bapuji Talpade who is credited to have constructed India's first unmanned plane. The movie is set in Bombay, 1895.

After repeating the same class eight times, Shivi is expelled from his school. Enjoying his newly attained freedom, he bumps into Sitara and here strikes cupid! Sensuality personified, Sitara is a local diva. Fed up with Shivi's rebellious and carefree ways, his father shows him the door. Reality daunts hard on Sitara.

Fearing that she will bring shame and disgrace to Shivi, she decides to leave the city. Dejected and distraught, Shivi slips into a life of sin and...