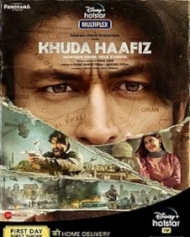 Khuda Haafiz opens with a matchmaking scene, in which 'computer ka doctor' Sameer (Vidyut Jammwal) and Nargis (Shivaleeka Oberoi) are introduced to each other by their parents. Post some 'akele mein baat-cheet' and a forgettable song, the duo get married. However, the newlyweds' world comes crashing down when they lose their jobs as a result of the 2008 global recession.

The couple decides to take up a job in Noman, a fictional middle-eastern country on being told that "Noman ke tel ke...