In the recent past, Taapsee Pannu and Kangana Ranaut were pitted against each other, courtesy Kangana's sister Rangoli Chandel. Rangoli tried to demean Taapsee when she called her a 'sasti' version of Kangana and made verbal attacks on her acting chops.

Contrary to Rangoli's views, many agree that both Taapsee and Kangana are supremely talented. Writer Kanika Dhillon, who has penned the scripts for Manmarziyaan and Judgementall Hai Kya, which starred Taapsee and Kangana respectively, was all praises for both the actors.

IANS quoted Kanika as saying, "Kangana and Taapsee have interesting untamed charm that they bring on screen. There is a certain rawness in their performances that always justifies the character I write, whether it is Rumi (for Taapsee) in Manmarziyaan and Bobby (for Kangana) in Judgementall Hai Kya. I love them both as actresses. So I am really looking forward to work with Taapsee again. I am aware one of the prominent similarities is their curly hair. I think, girls with curly hair are more rebellious! Actually, both of them have a strong mind and I naturally gravitate towards people with strong minds."

Kanika is the writer of Haseen Dilruba, a romantic thriller which Taapsee is a part of. Vikrant Massey will be starring opposite Taapsee. Talking about the movie, Kanika said, "It is a love story, a thriller that revolves around a couple played by Taapsee and Vikrant Massey and it poses the question if the bond of love can stay strong enough to survive the test of time? It is a 'bloody' love story, quite literally and metaphorically." The film is being directed by Vinal Mathew, and is scheduled for release on September 10, 2020. 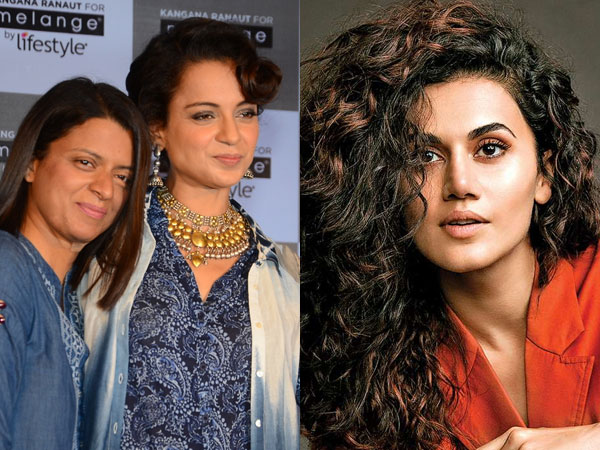 ALSO READ: Taapsee Pannu On Rangoli Calling Her Kangana's 'Sasti Copy': 'I Have No Time To Spare For This'