From the plethora of incredible performances Irrfan Khan put out in his career, it is hard to pick one. But the 2013 movie, The Lunchbox is definitely one of his best. Irrfan's The Lunchbox co-star, Nimrat Kaur offered her condolences , saying that the face of Indian cinema will never be the same.

IANS quoted Nimrat as saying, "It is a personal loss for everyone at this point in time. For everyone who watched his movies or worked with him and met him personally, this is absolutely shocking. I think the face of Indian cinema will not be the same without Irrfan Khan. He was a one-man army. Every film and film stars are on one side and his films are on the other. My heart goes out to his family at this point in time, when we all are suffering under a specific situation. Losing a loved one is always painful but I think this (the COVID-19 lockdown) is worse. I cannot imagine I am talking about Irrfan in the past tense."

Nimrat also recalled a heart-warming conversation she had with him, when their film won the Critics Week Viewers Choice Award at the 66th Cannes Film Festival.

"We did not have many scenes together but we got a chance to converse extensively during the premiere of the film at the Cannes Film Festival. I was quite overwhelmed by the response to the film, the way it was celebrated and what it became overnight! I remember I asked him, 'how do you handle so much appreciation, adulation when a film meets a great success like this?' he smiled and told me, 'sock up to good times and don't be shy of celebration. This is the gift that God has given us. The bad time is around the corner,'" she said.

Irrfan passed away on Wednesday after being admitted to Kokilaben Dhirubai Ambani hospital due to a colon infection. He had been diagnosed with a neuroendocrine tumour and was undergoing treatment for the same. 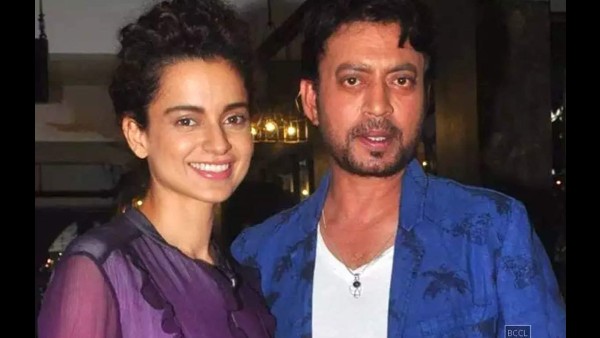 ALSO READ: Kangana Ranaut On Irrfan Khan's Demise: He Was A Sucker For Life & Wanted To Live Every Moment

ALSO READ: Irrfan Khan's Last Words Before Embracing Death Will Break Your Heart: Amma Has Come To Take Me Away