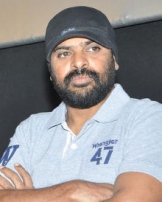 Ameer Sultan is an acclaimed Tamil film director and actor. Based in the Chennai film industry in Tamil Nadu, he has directed three Kodambakkam films in the Tamil language, his latest one being the multi-award winning film Paruthiveeran released in 2007. Currently he is working on the film Yogi, in which he makes his debut as a actor and which is to be released in May 2009.

Early life and career
Ameer Sultan was born on April 2, 1966 in Madurai, Tamil Nadu India. He initially studied economics and worked as an entrepreneur before starting to work as an assistant director to Tamil filmmaker Bala on his award winning film Sethu in 2002. Shortly after, he directed his first film, Mounam Pesiyadhe, and began his own production company, Teamwork Production House.

He later directed Raam and received critical acclaims and awards for the film at the Cyprus International Film Festival. In 2007, he directed Paruthiveeran starring Karthik Sivakumar and Priyamani.

The film found international success, winning the Best Film Award at the Osian's Cinefan Festival of Asian and Arab Cinema, A Netpac Award - Special Mention at the Berlin International Film Festival and numerous awards at the Filmfare Awards South including Best Movie and Best Director. It opened well at several world film festivals.